By Jared on September 13, 2014 GeorgiaVideo Posts

After yet another hot, but cruisy days ride taking in the Georgian scenery we thought we had found the perfect little spot to camp for the night. The plan was to camp at the base of what would be our final 2000 meter pass of this trip and clean up in the mountain river.

I had the idea of crossing to the other side where I could see some nice trees to pitch our tent under for shade and the river, though running fast, wasn’t much higher my calves, so Katie and I pushed our bikes through.

Little did we now that in a matter of hours the clear blue skies would become black and the heavens would open.

Thunder, lightning, rain and hail went on for more than an hour before we could access the damage to our gear. All our bags are waterproof and survived. Even a couple of centimeters of water under the tent did not dampen our moods.

Then we heard it. Katie thought it was more thunder, but looking up we could see that it was infact a flash flood. What was already a swollen river turned into a raging torrent as a wall of water, rocks, and debris came flowing down. 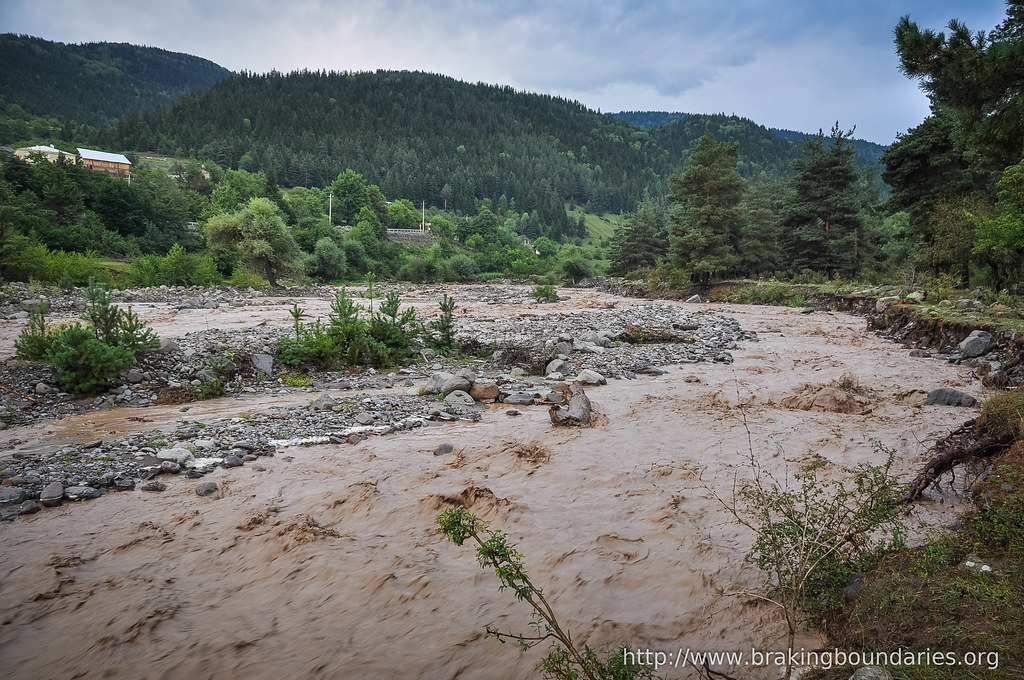 Cut off from the village on the otherside we did what anyone else would do and started to cook dinner. While preparing Katie mentioned she saw people on the other side of the bank. Normally we try to go unnoticed camping, but I decided for safetys sake that I would walk over and give them a wave just to let the local villagers know that we were here.

Turns out they were the farmers of cows on our side and the stupid cows were trying to cross the raging river. With a bunch of yelling (in Georgian) and hand signals I figured they wanted to enlist my services as a cow herder so I promptly picked up a stick and started chasing cows all over the place. At one stage they all gathered around where we were camping trying to eat our food and clothes and Katie had to shoo them away.


But I did my job and pushed them up the valley to safer ground and where there was apparently a bridge (found it the next day) to the otherside. Of course the farmers thought we were nuts to be camping the night there and offered a place to stay to which we politely declined.

I am now adding “Cow Herder” to my resume.

What is this Licorice Stuff?
One Last Big Climb in Georgia