You are here: Home > ReAsia 2014 > From the Road > The Pamir Highway, Murghab to Sary-Tash

By Katie on August 25, 2014 From the RoadTajikistanThe Pamirs
Check out all Pamir photos for Murghab to Sary-Tash

After our night with the mosquitos and the cooker breaking, we were up early to attack the climb. The wind was down and we had a good road all the way up to the start of the climb. On our way up we met a German couple who were on their way down. This was their third time to the Pamirs, they keep coming back because they love it so much. 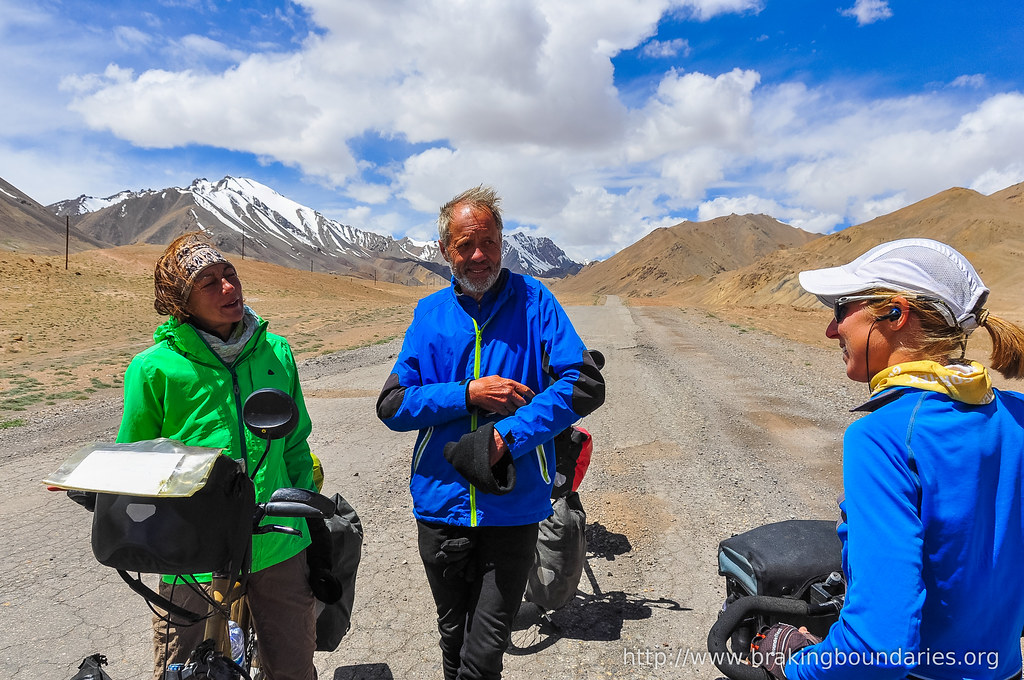 They gave us a heads up about the road and water supply ahead and then we were both on our way again. The climb up wasn’t too bad. We had good road and a gradual climb until we were about 5km from the top. There the road turned to dirt and got extremely steep. 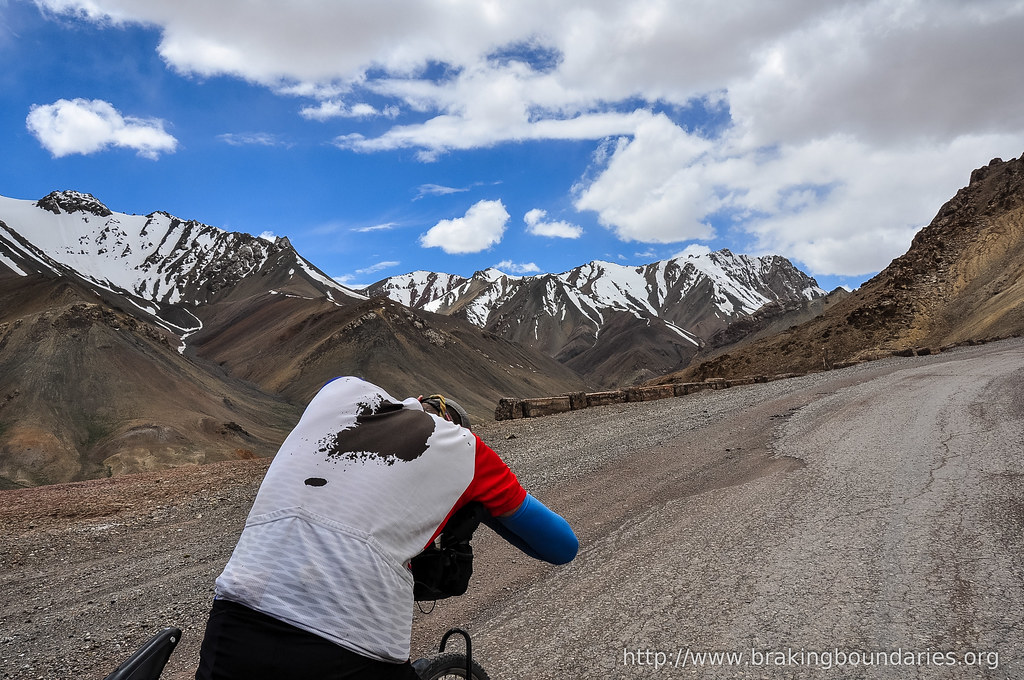 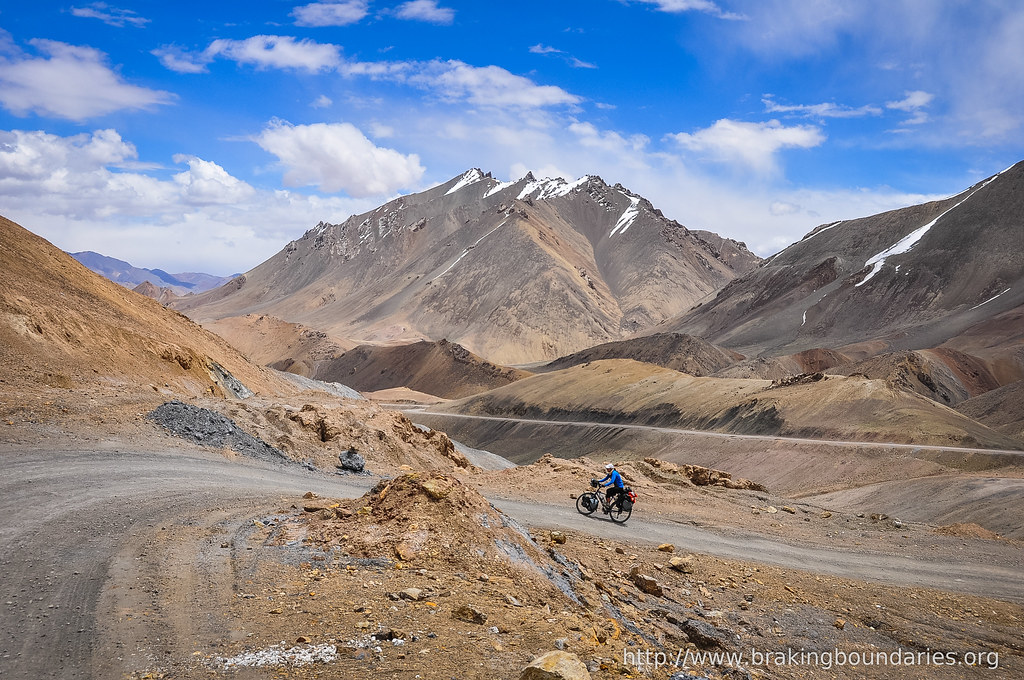 But once to the top we could breathe a sigh of relief knowing the 4665 meters we were at was the highest we would have to climb for a very long time. 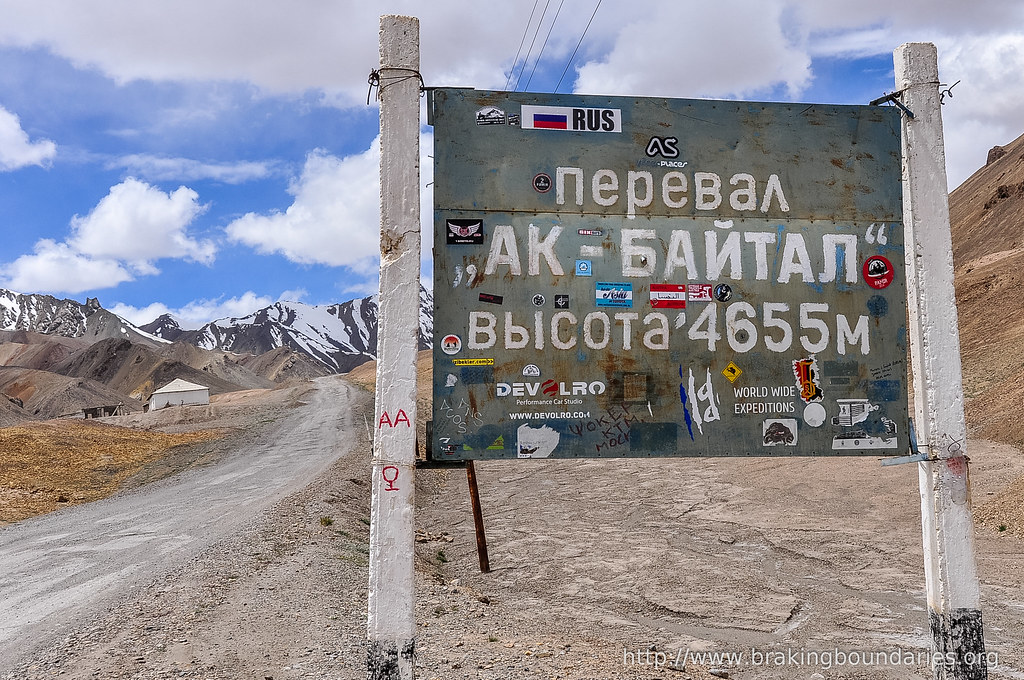 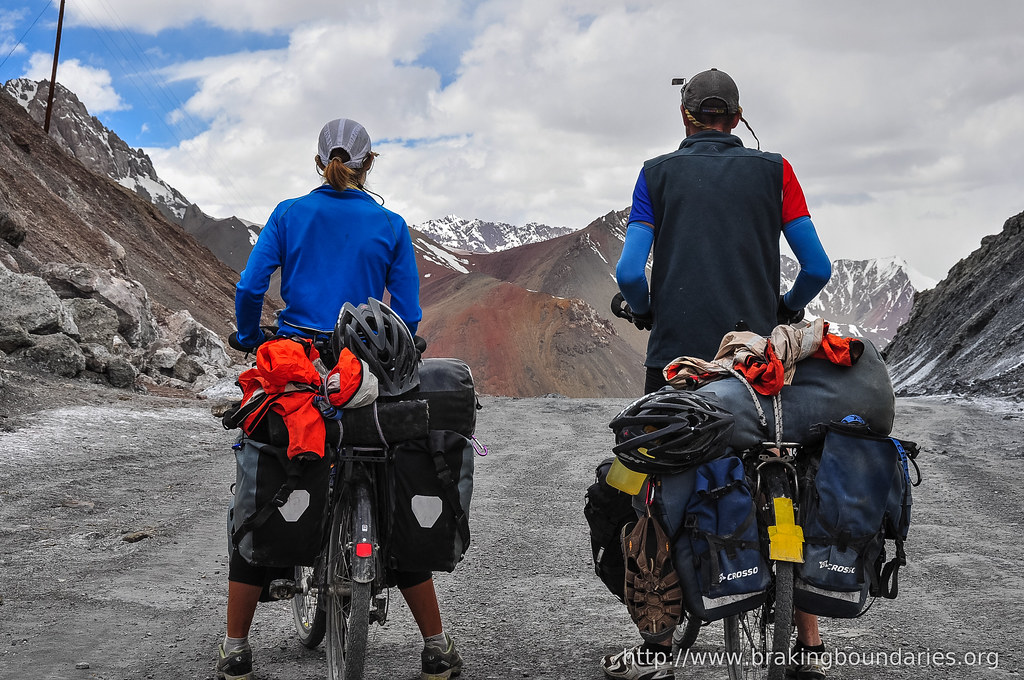 We made our way down the windy, dirt road to find a place to camp. Another short day but we had the border well in our sight so we didn’t mind stopping early. We had a great spot, by water and with amazing views of the snow topped mountains. 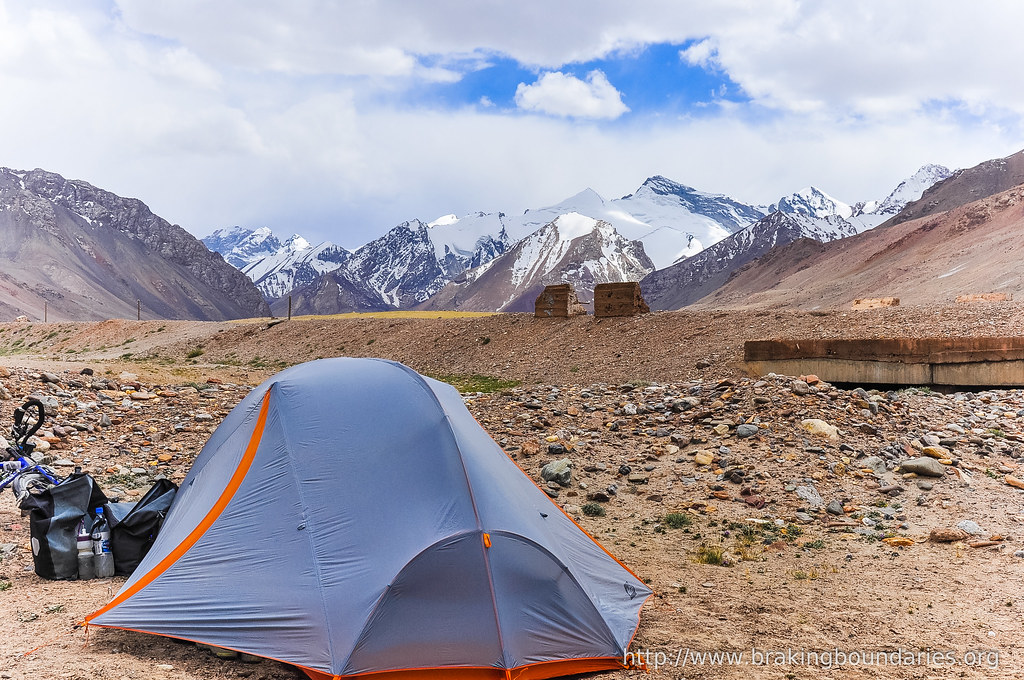 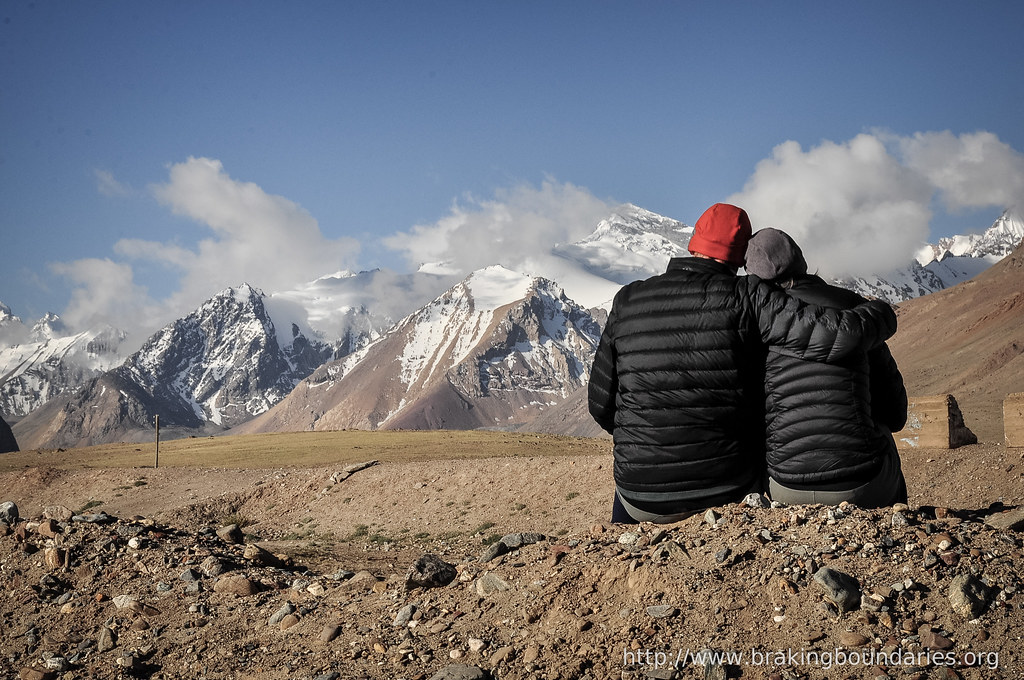 The next morning we set out to make it to the border. It was 100km away and we thought it was doable. But the road out of the pass stayed dirt and crappy and slowed us down quite a bit. 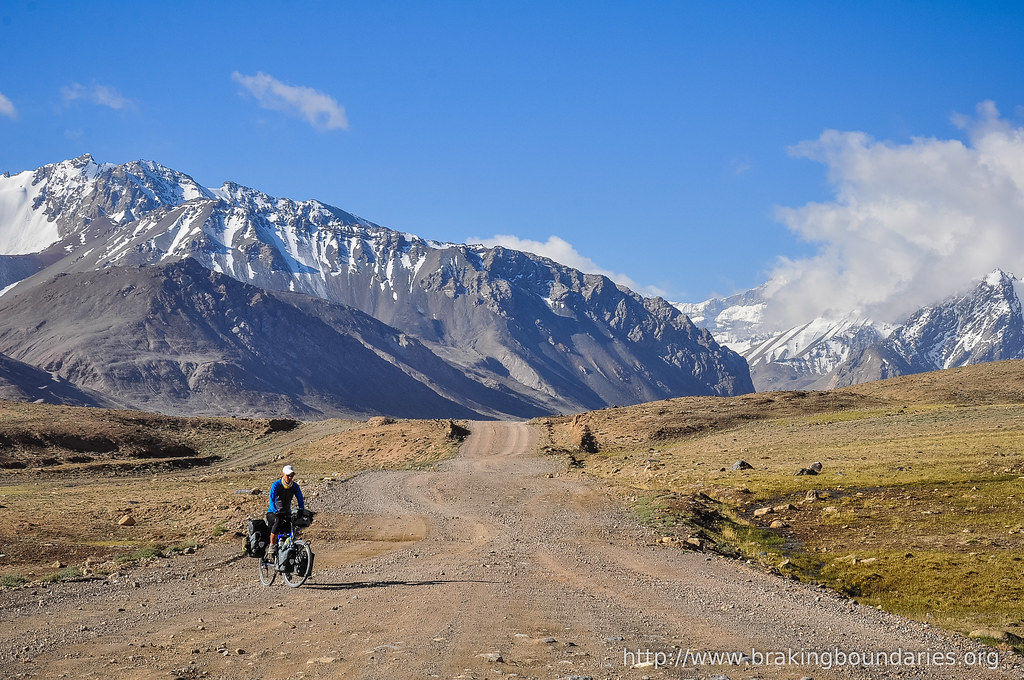 We passed by Lake Karakul in the late morning and stopped for some lunch. Karakul lake was formed by a meteorite more than 25 million years ago and is a brackish lake, which is a lake that is part salt and part fresh water. It was pretty but neither Jared or myself thought it was anything special. 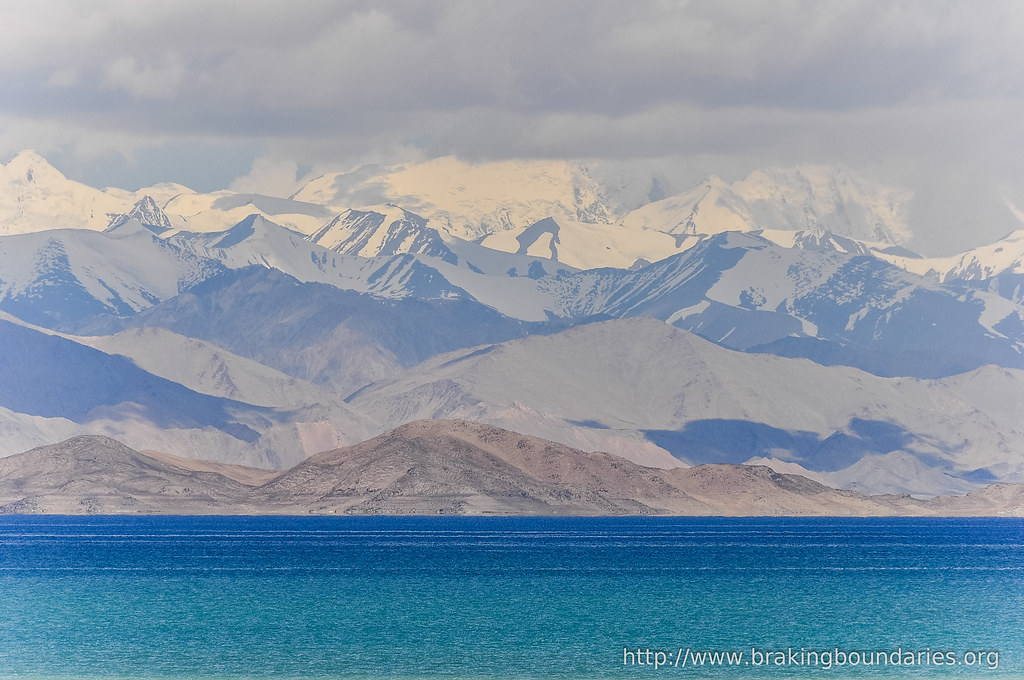 We continued past the lake and headed for our first of two climbs out of Tajikistan. The road wasn’t too hard but we had a strong side wind that wasn’t helping. We were trying so hard to get to the border that day but the terrain and wind had different plans. After we went around the lake we turned into the strong head wind and it turned to a head wind. 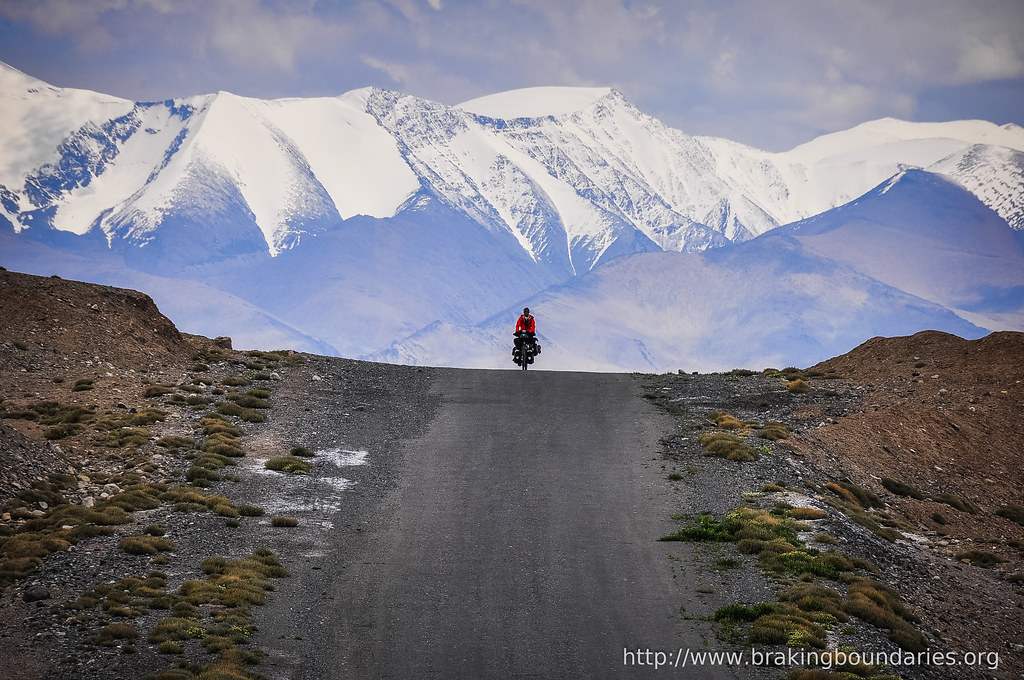 We were just about over the first climb when we came to a river and a sheltered area to camp. It was only 2pm but the border was 25km away and the road was not getting any easier. We decided to call it a day and relax and watch TV. We’d cross the border the next day. 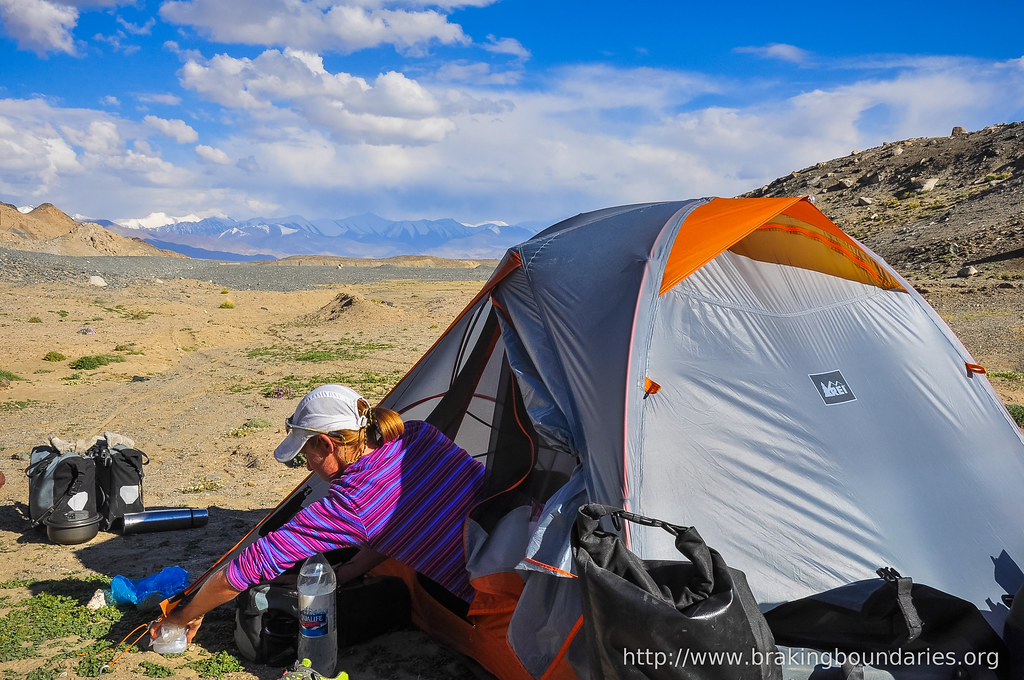 The next day we crossed out of Tajikistan one day before our visas expired but not before one last climb in the Pamirs. The road wasn’t too bad and we could enjoy the down early in the morning. But once we hit the last climb, we were riding on dirt once more. 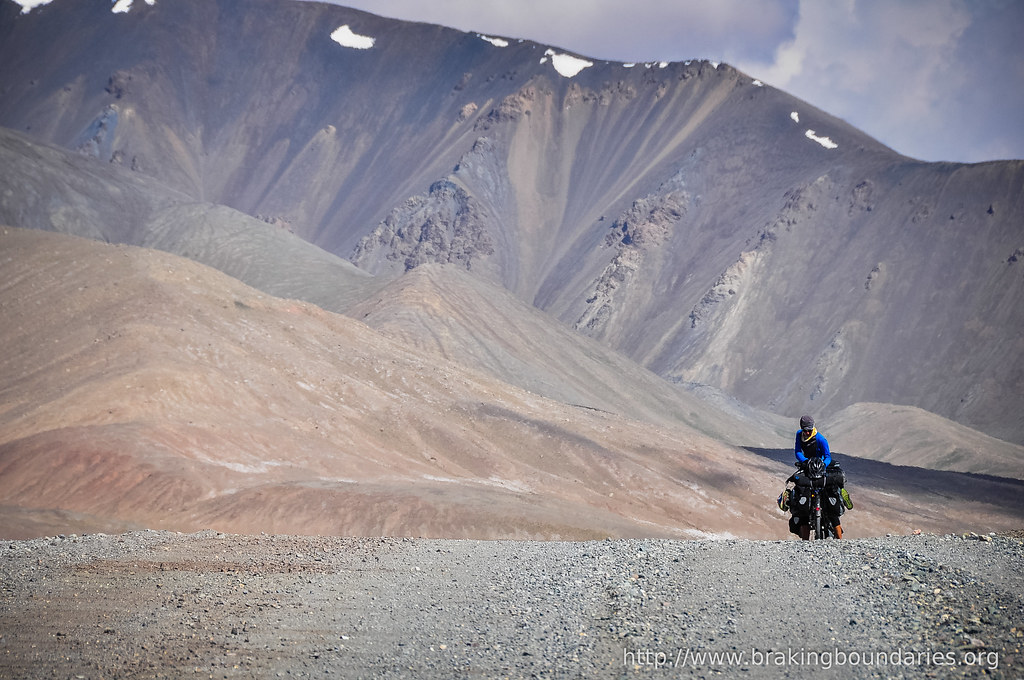 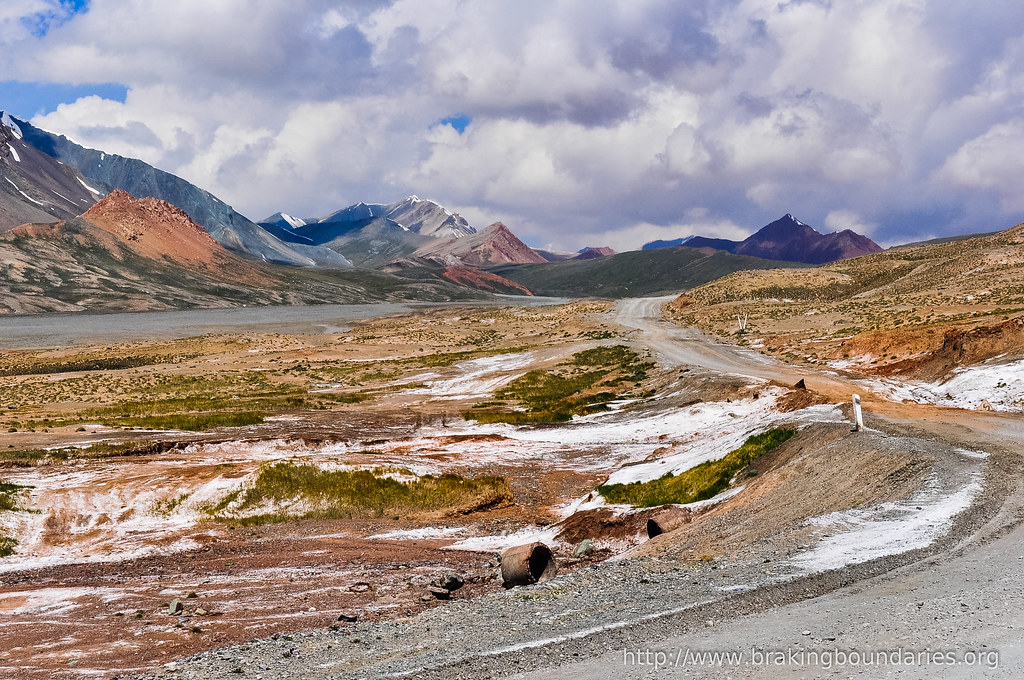 It didn’t take us too long to ride the last 25km and we made it out before 11am. 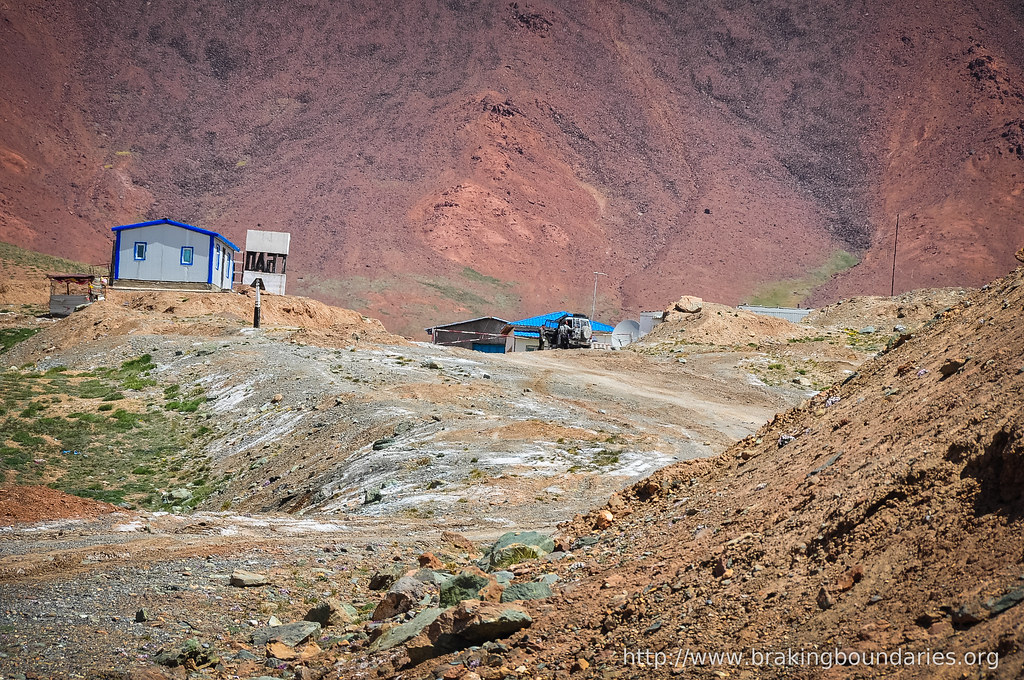 Then we hit the 30km of no mans land between Tajikistan and Kyrgyzstan which had a crazy steep downhill, rivers running through the road, and missing road where the water had gotten too strong. 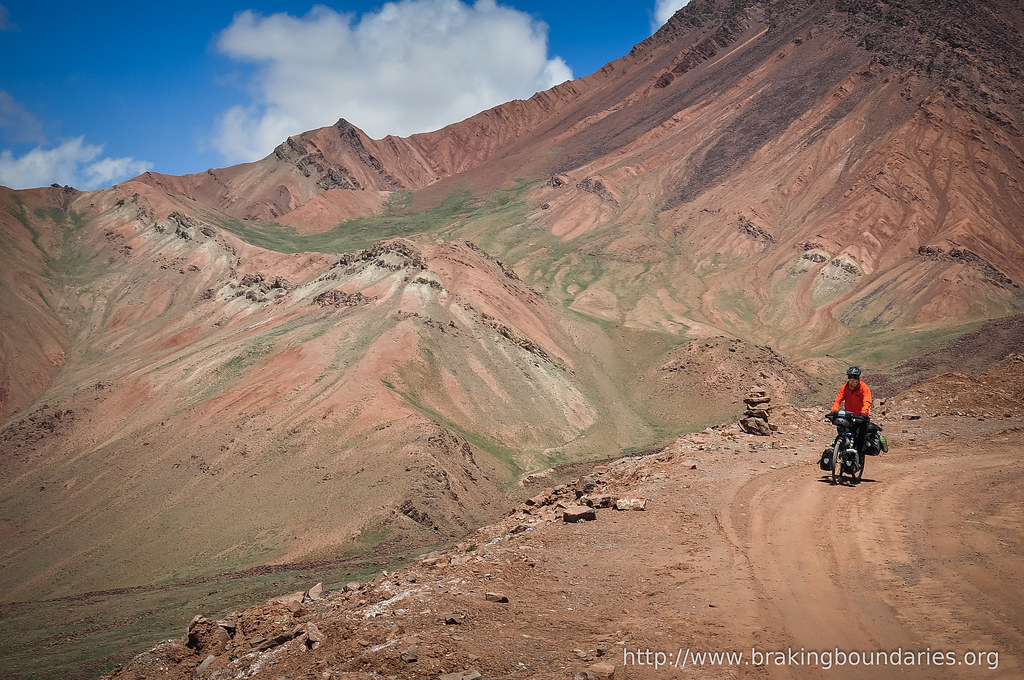 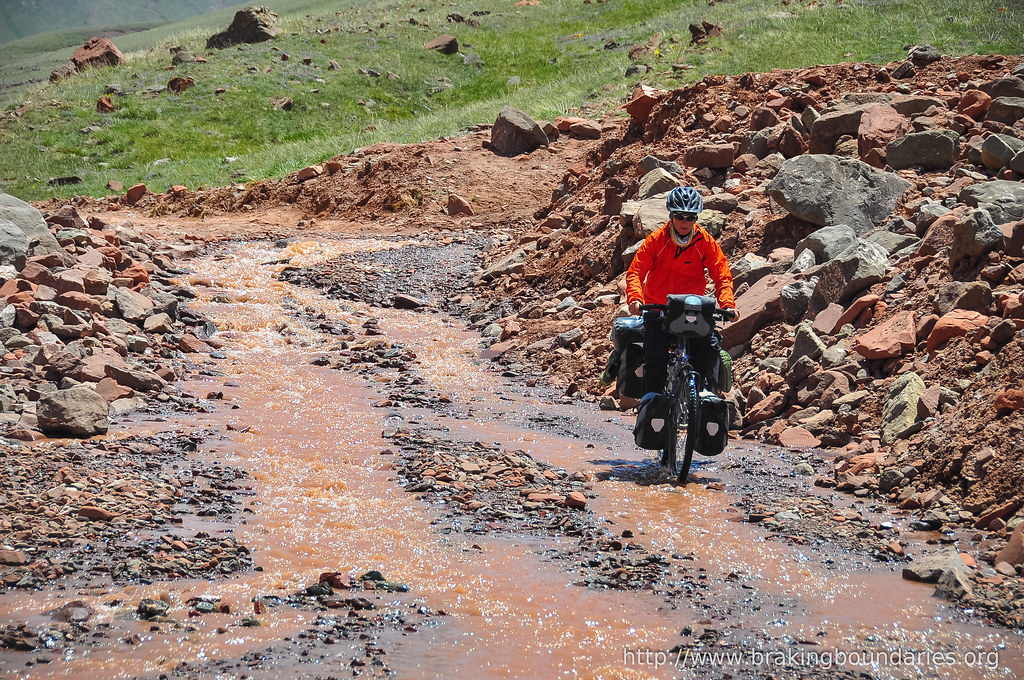 It was an eventful ride to the Kyrgyzstan border control. Had to walk the bikes through one river, tried and failed to cross another, and after all that my chain broke. But we did finally make it back to Kyrgyzstan and crossed back in the country. We found a spot to camp with an incredible view of the most impressive mountain range I’ve seen and called it a day. We weren’t done riding yet, still had to get to Osh, but we successfully rode the Pamir highway. Check that off the bucket list. 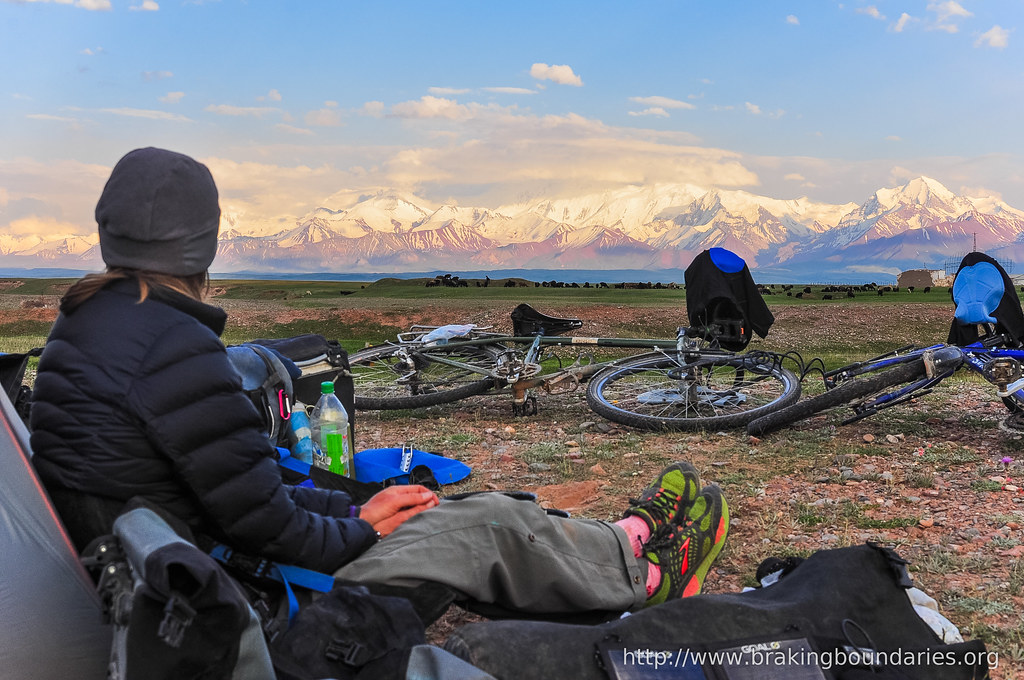 Check out all Pamir photos for Murghab to Sary-Tash

The Pamir Highway, Khorog to Murghab
Sary Tash to Osh. The End of the Road