You are here: Home > ReAsia 2014 > From the Road > The Pamir Highway, Khorog to Murghab

By Katie on August 23, 2014 From the RoadTajikistanThe Pamirs
Check out all Pamir photos for Khorog to Murghab

After leaving Kieran and Marley in Khorog, we had 13 days to cross the Tajikistan border before our visas expired. We had to cover 500km (310miles) of tough terrain that included numerous peaks of over 4000 meters (13,100ft) with the highest at 4665 meters. We knew it wouldn’t be easy but we had our bags packed full go food and ready to ride. 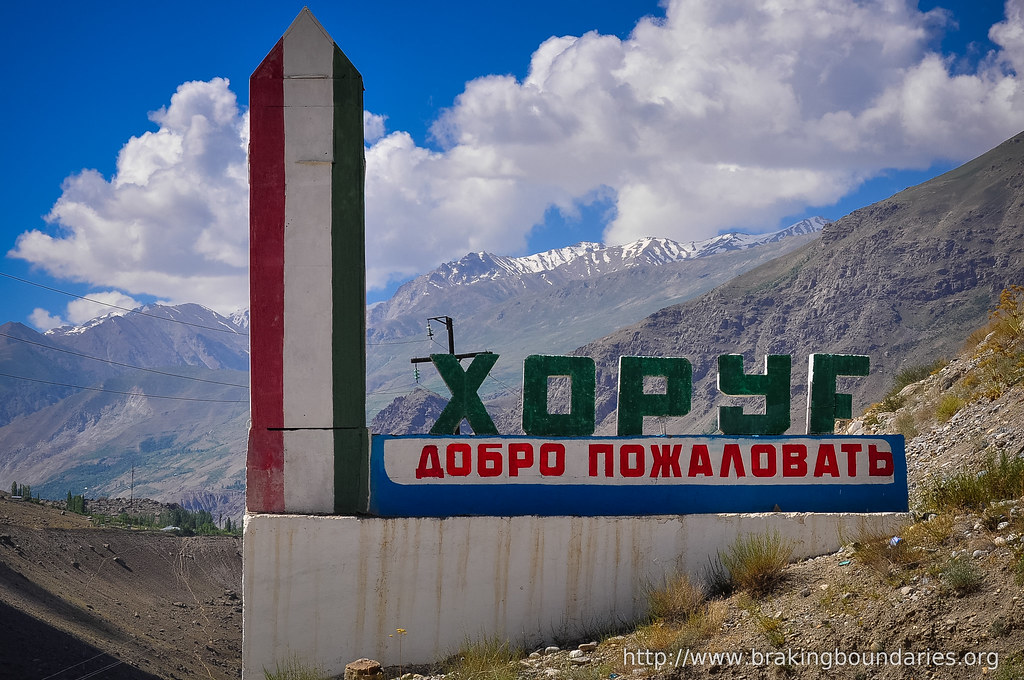 The first two days out of Khorog were on nice roads with beautiful scenery. We had an amazingly clear river flowing at our side, snow topped mountains all around, and an open road ahead. We had to average 65km a day in order to get to the border on time and in the end, that was no problem. 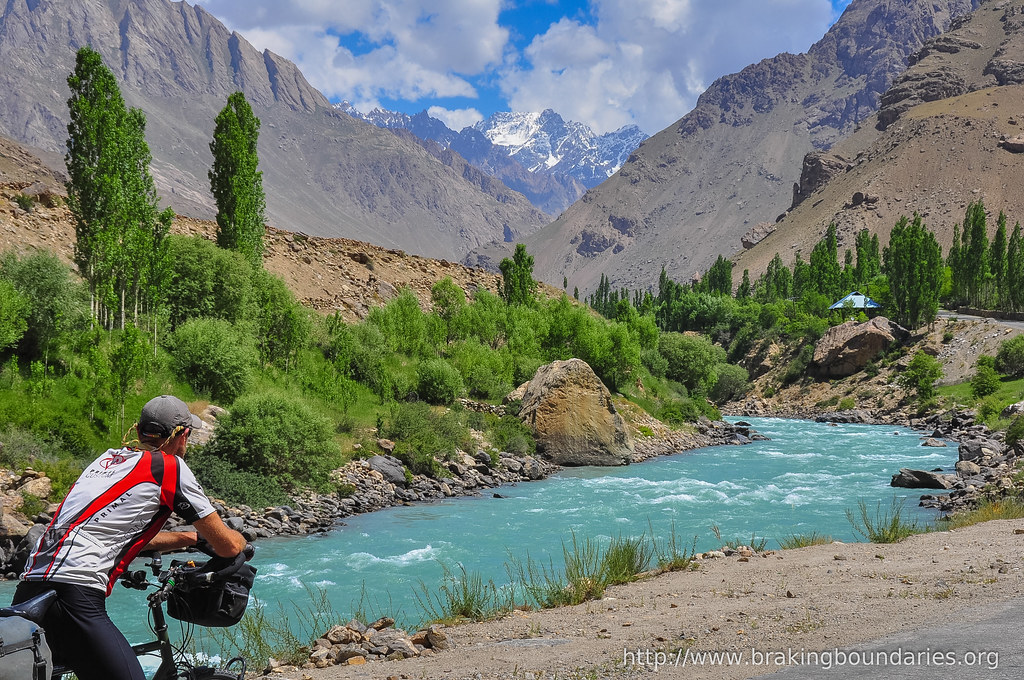 Our first night back on our own, after leaving Kieran and Marley, we found a nice spot to camp right next to a river. Just as we were setting up, a young man came over and started talking to us in almost perfect English. He invited us to his house but we had to decline because we were already set up. He understood but then proceeded to bring us piping hot bread from his mother. People are amazing! 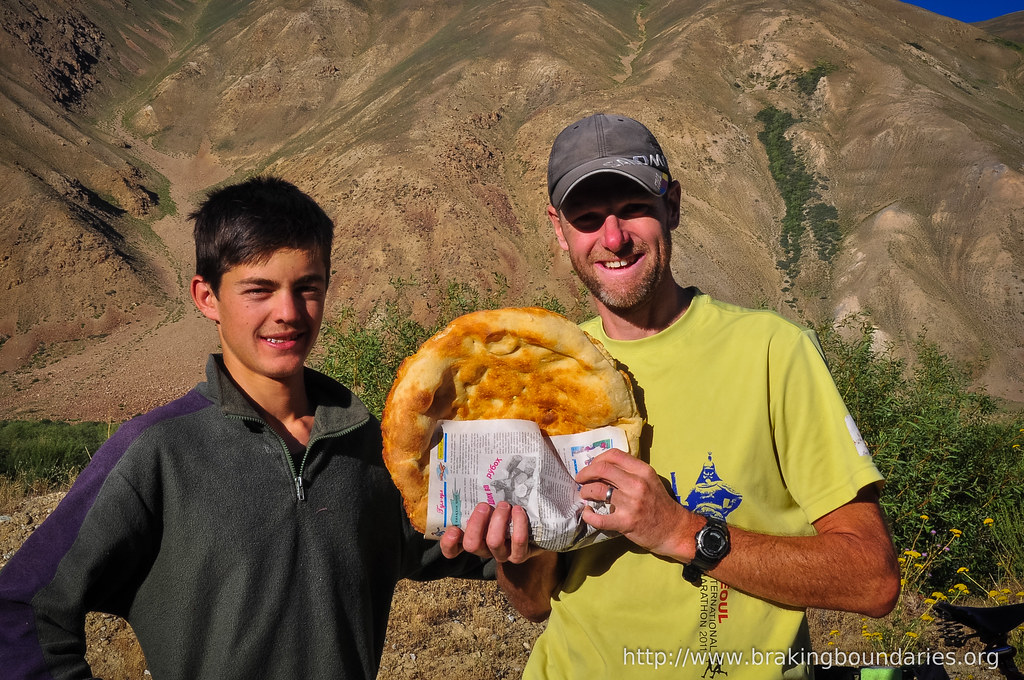 Day two was just as wonderful as day one with amazing scenery. We once again found a place to camp right next to a river in a place we thought was deserted. After spending the day seeing no people we were shocked when we heard voices as we were climbing into the tent to watch TV. 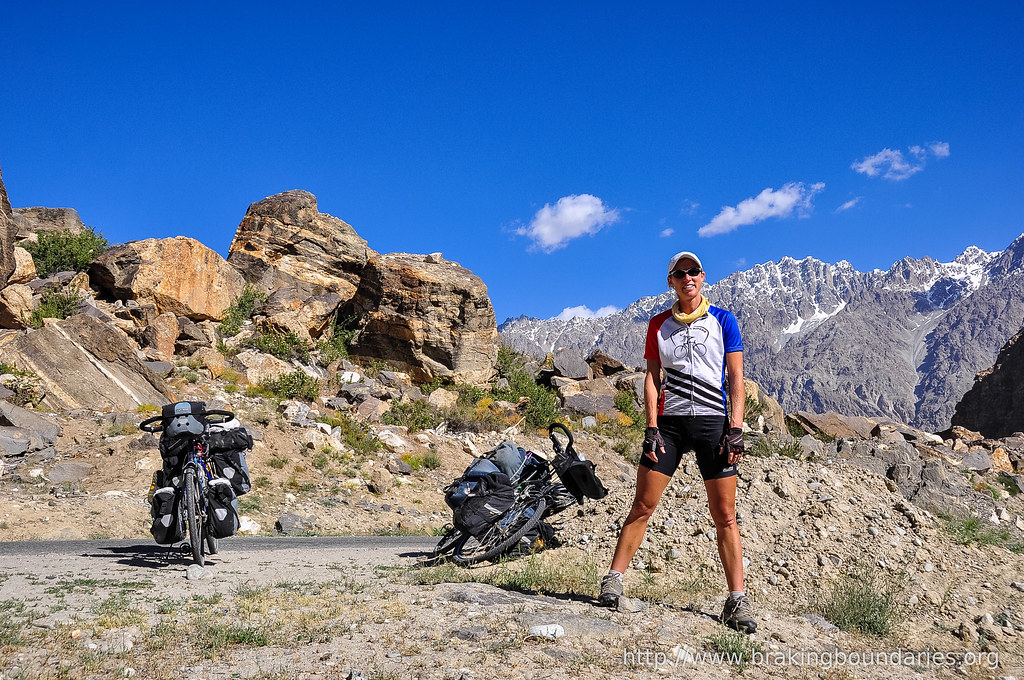 There was a group of guys walking past so Jared stuck his head out to say hello. They wanted him to go drink with them but he declined. Not more that 10 mins later was there two boys on a donkey outside our tent. Once again Jared popped his head out to say hello. They kept talking to us but we couldn’t understand. Finally one pointed to his wrist and we finally figured out he just wanted to know what time it was. Once we told them, they were gone. We still aren’t sure where all these people came from but they sure were friendly. 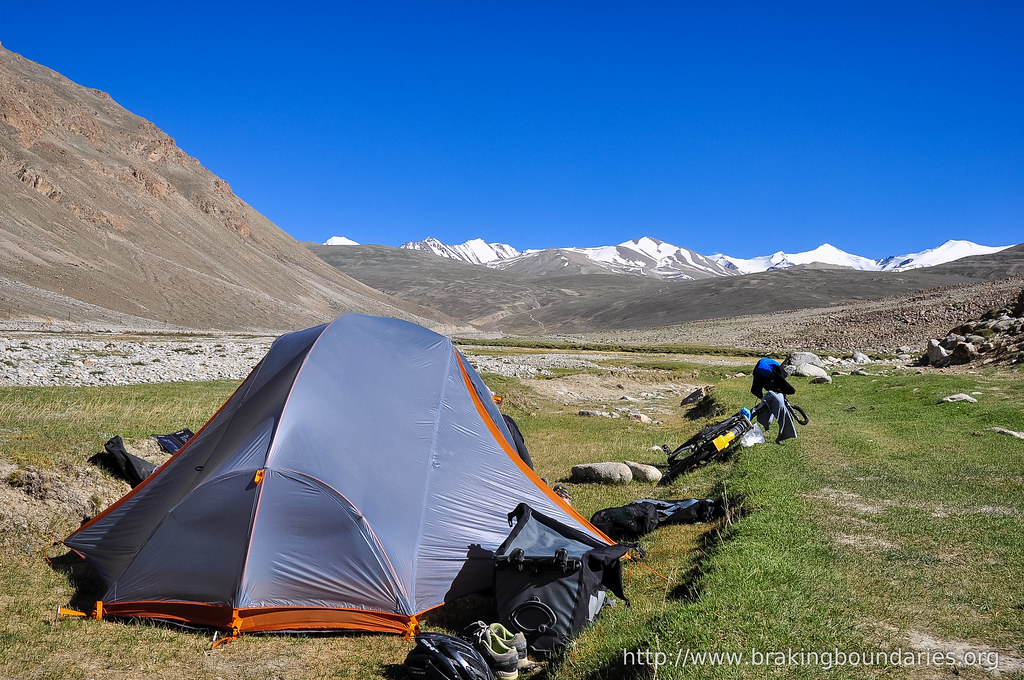 Day three was a bit rougher than the first two. We had one climb to do, or so we thought, and what we thought was 6 km of dirt road. 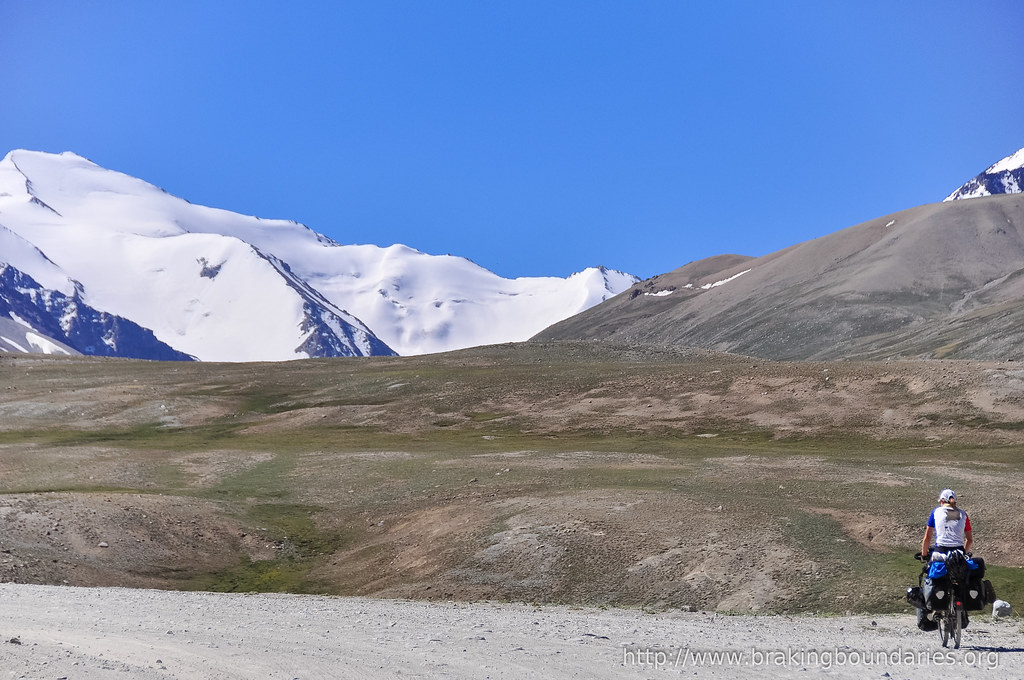 The climb was hard but nothing we didn’t do in China, however on the top we were surprised to see what was ahead. Not only was it more than 6km of bad road, (more like 30 km), we also had much more climbing to do. After the first pass we dropped a bit and could see another rise in the distance. Needless to say I was not happy with whoever gave us this wrong information. 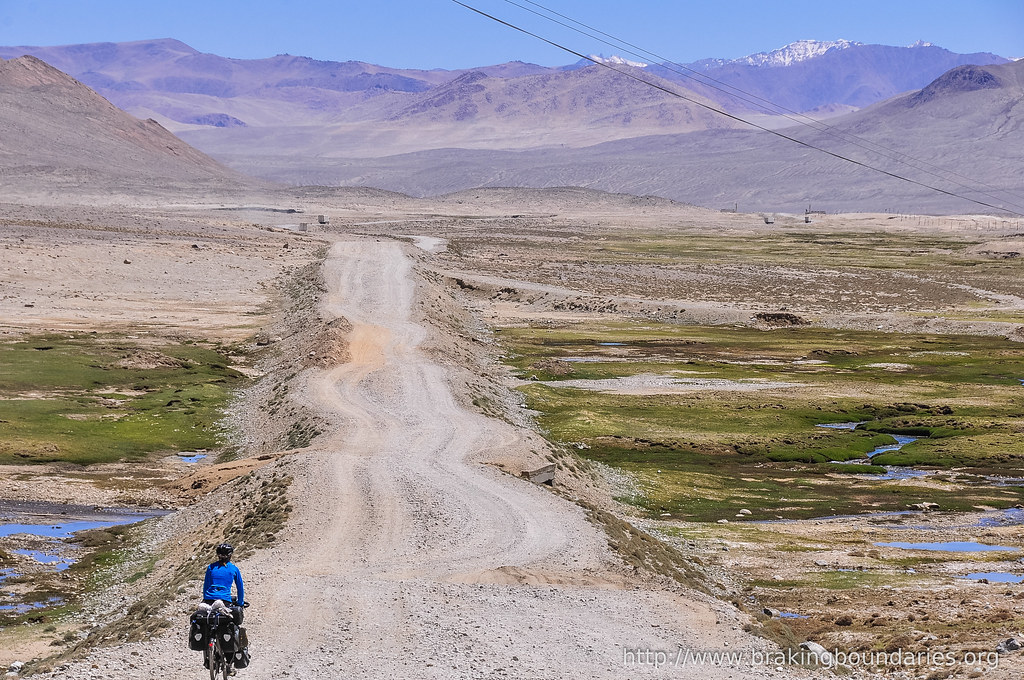 We made over the next pass just to be greeted with my favorite type of road [insert sarcasm here]. Roly Poly. This is when the road goes up and down and up and down and you don’t really get anywhere and this went on for quite some time. 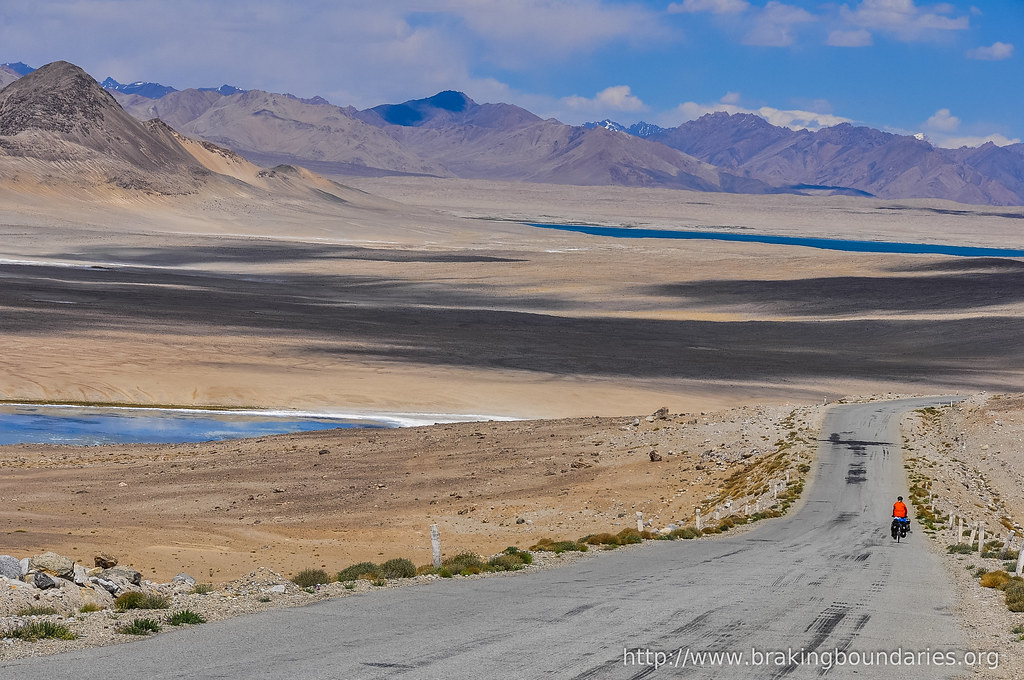 Once out of the roly polys we finally got to good road. Right outside the town of Alichur we hit nice road and had a massive tail wind which propelled us another 20km before stopping for the day. We smashed out 95km that day and brought our daily average down even more. 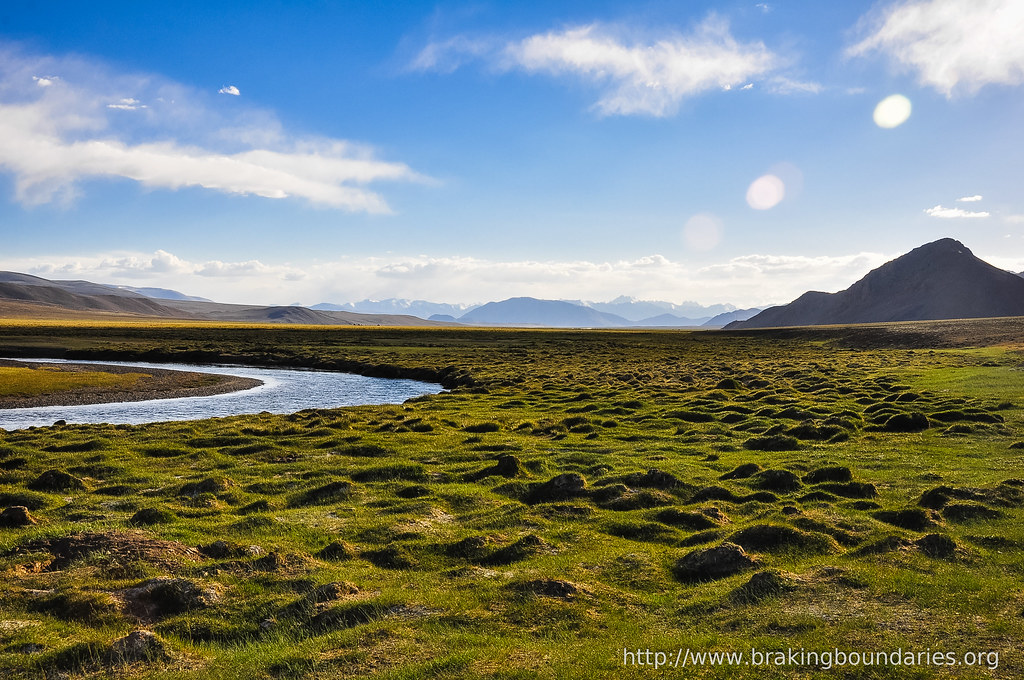 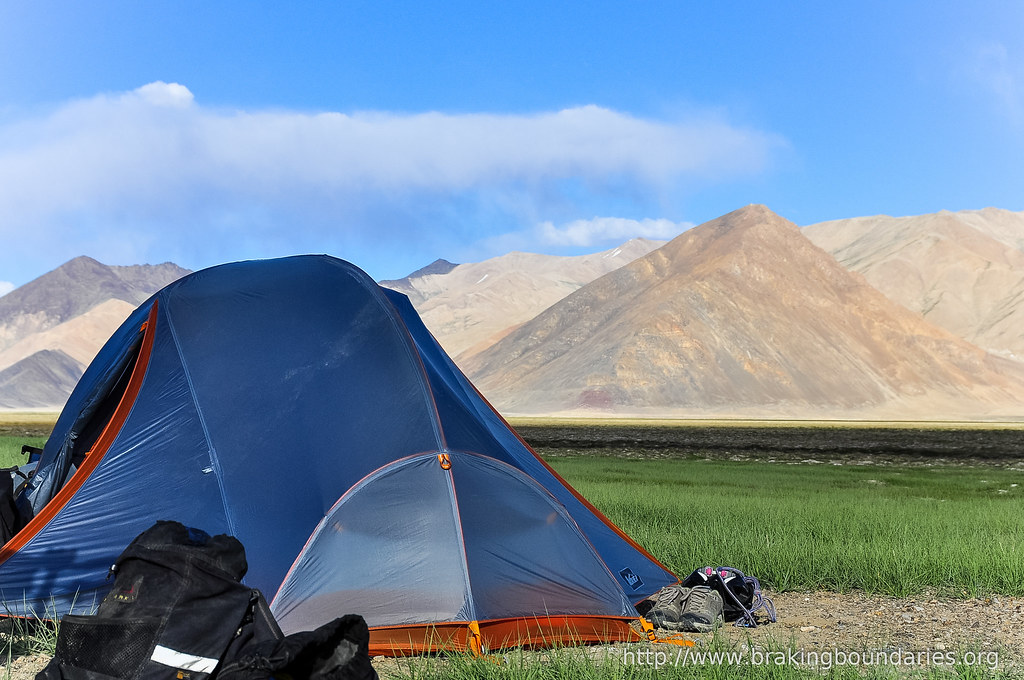 Because we had bigger than expected distances for the first three days we were only 40km from Murghab which we had assumed would take at least 5, so time was now on our side. 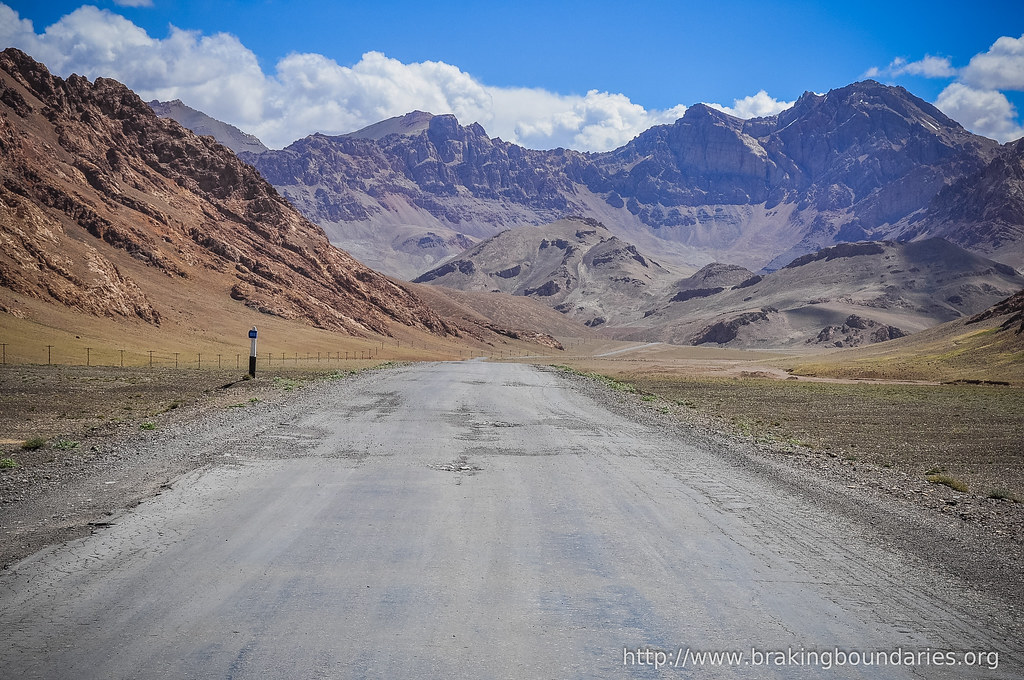 The nice roads were back and we had some nice downhill and tailwind all the way to Murghab. 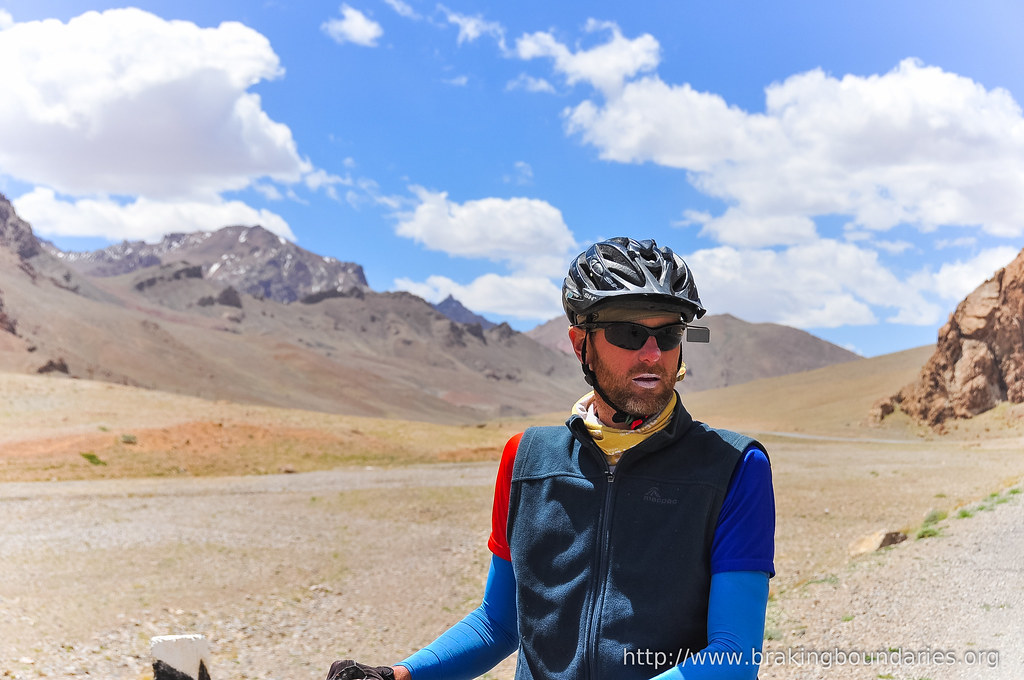 The scenery was starting to change a lot since we were now on “The rooftop of the world.” The strong flowing rivers had stopped and the snow covered mountains that towered over us where replaces with a landscape that looked like Mars. 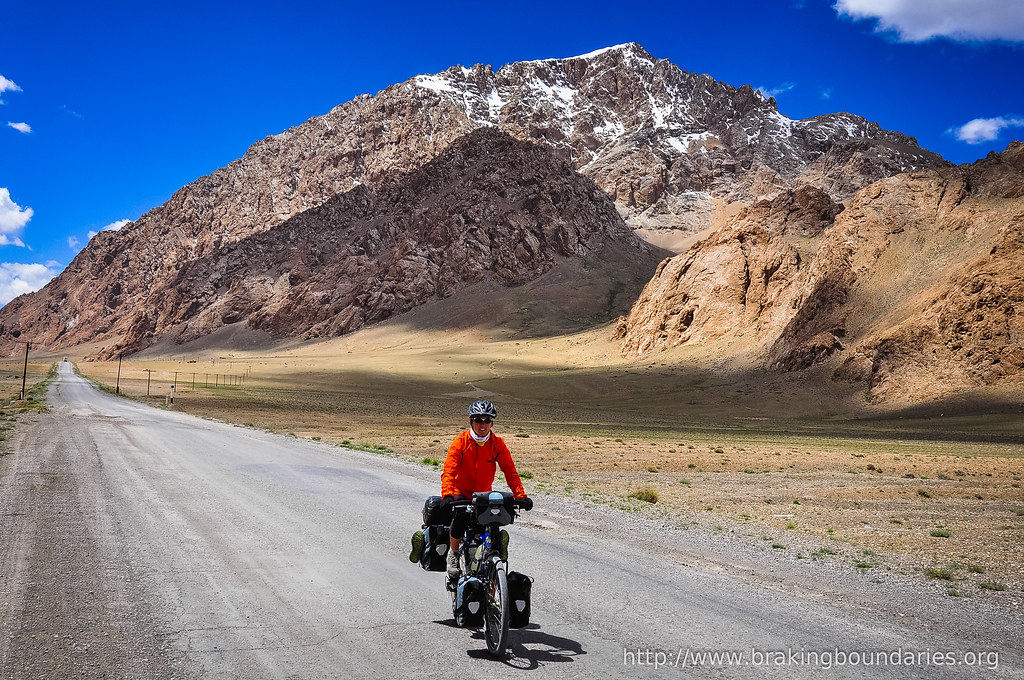 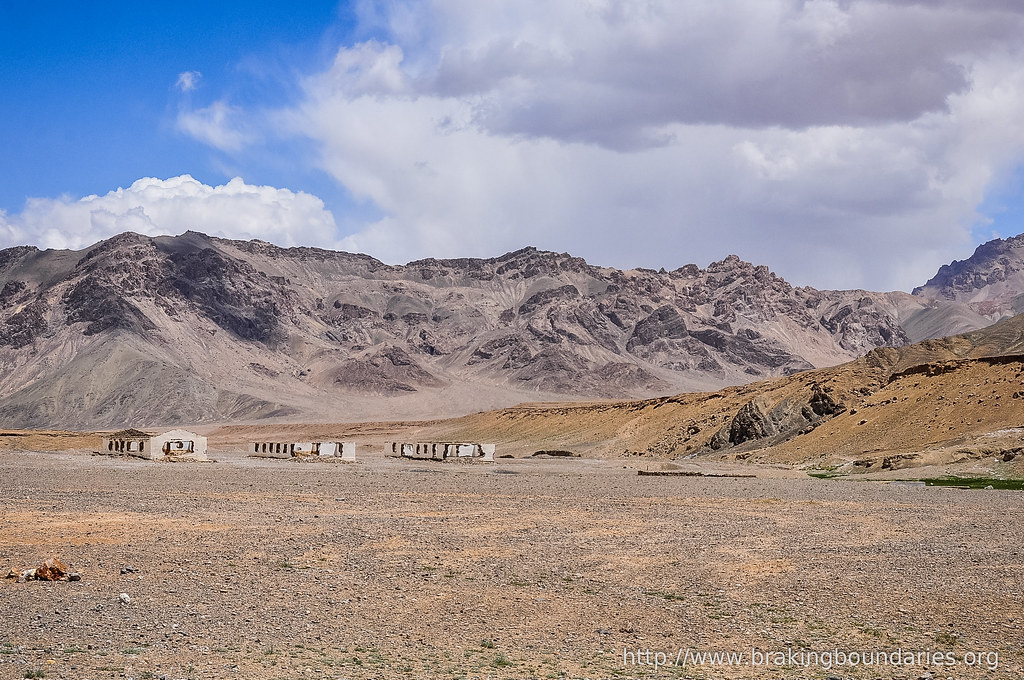 As we made our way to Murghab we were completely underwhelmed with the town. Now we both knew not to expect much when it came to the towns in the Pamirs, but Murghab was less than impressive. 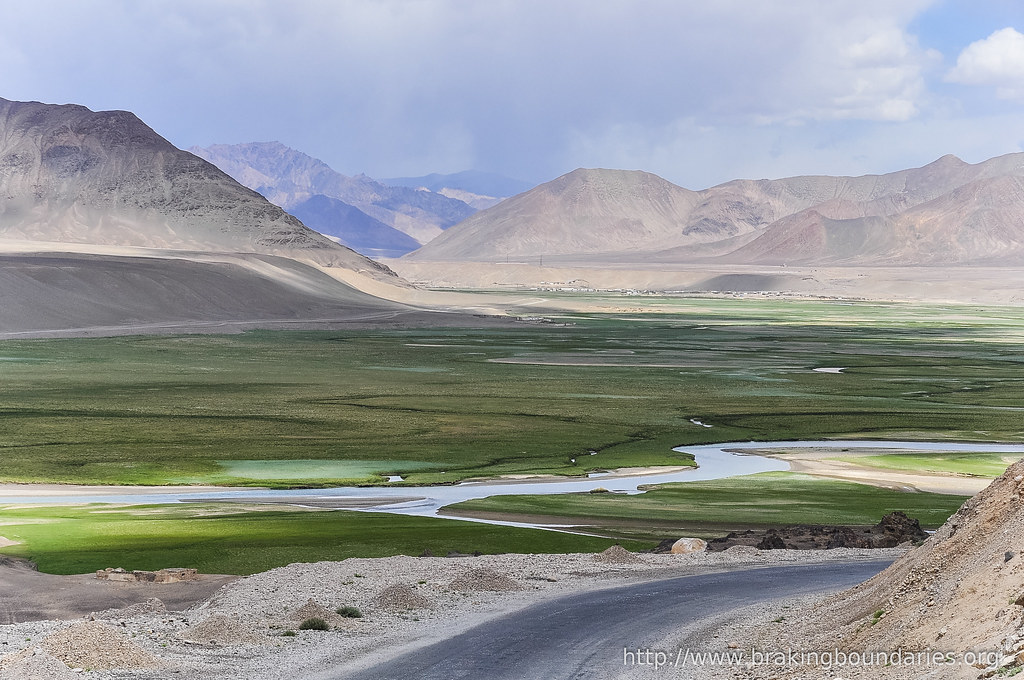 It was big for where it was located, pretty much in the middle of nowhere, but the look of it was more than depressing. We found our way into the town and the central markets, which were old train containers lined up next to each other selling all sorts of things. We were able to restock and get more veggies, bread, and snacks to make it to the border. We even found Coke and Sprite but that was about it. 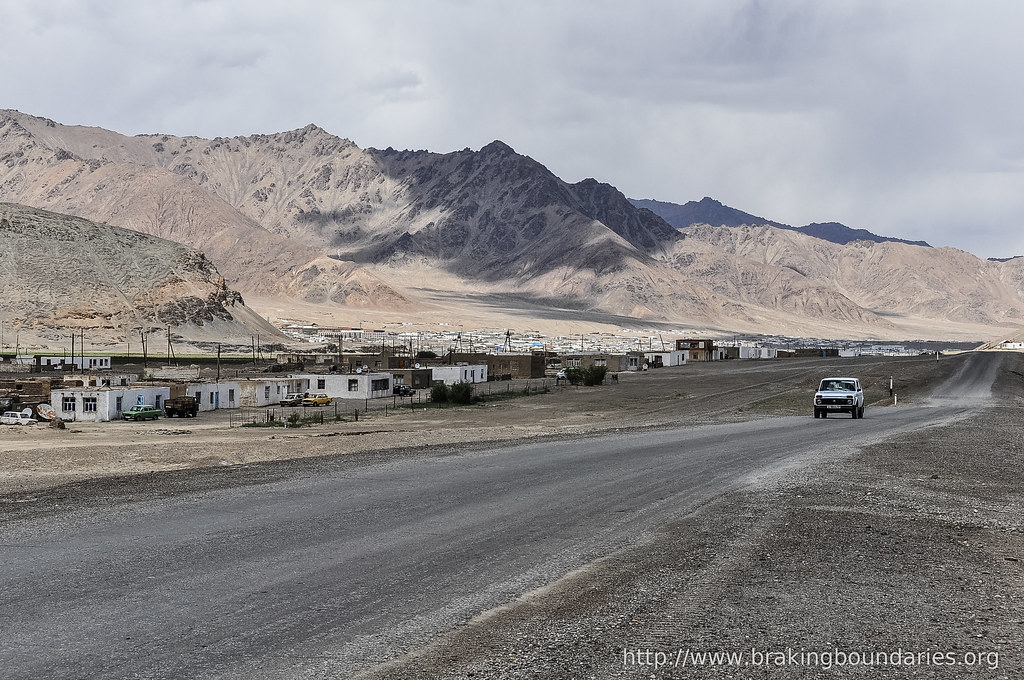 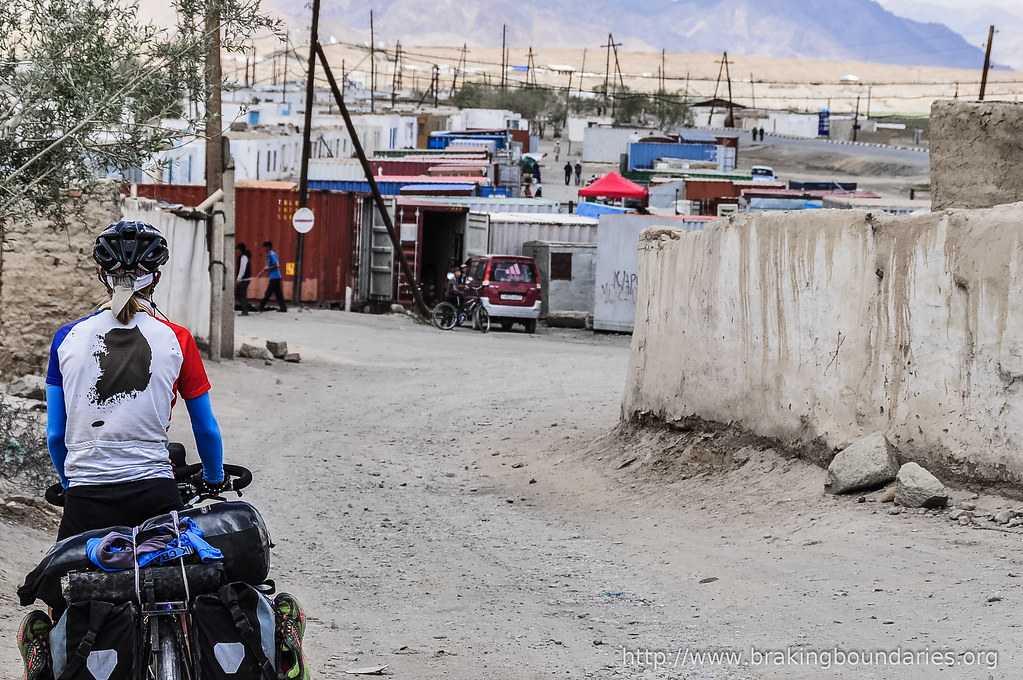 We even met a pair of cyclists going the opposite direction as us so we stopped and chatted and got the low down on the road ahead. One last stop to get gas then we were back on the road. The next 40km were gradually up hill and into the wind. It wasn’t easy and we rode with our headphones in for most of it. We were told the river that was on our right hand side dried up 50km up the road so we started looking for a place to camp around the 40km mark. 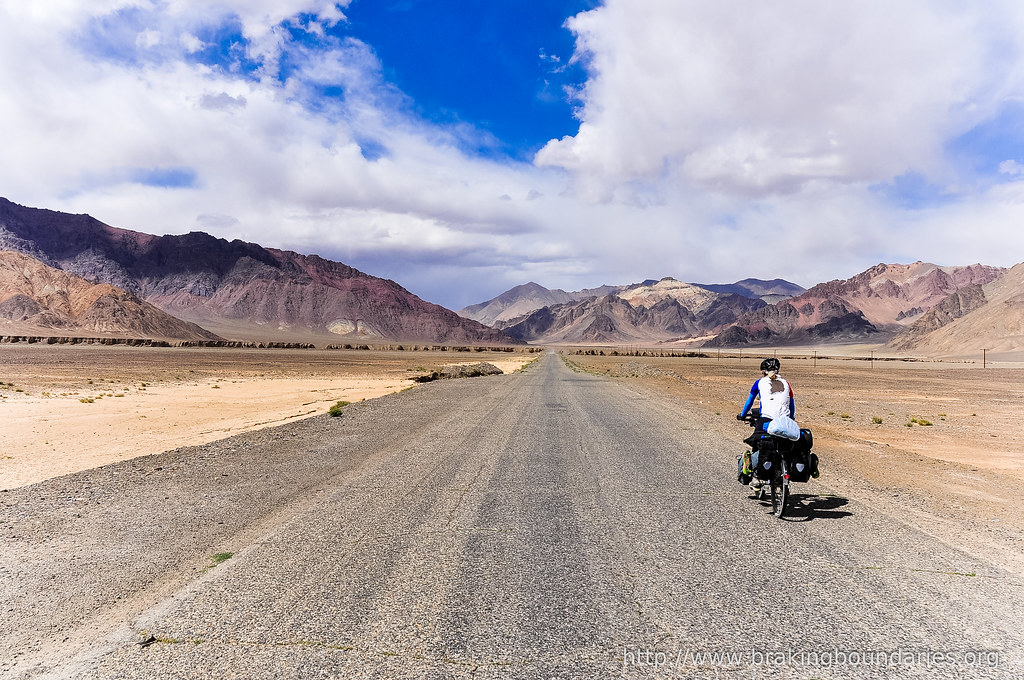 We stopped to check out one place and we were immediately swarmed with mosquitos! I’m still not sure how Mosquitos survive at 4000m but they did and it was awful. We quickly got back on our bikes, hoping the Mosquitos were only in that one area. After a few more kilometers we stopped again to check out another spot. The bugs didn’t seem as bad but turns out they didn’t seem bad because the wind was blowing them away at the time. 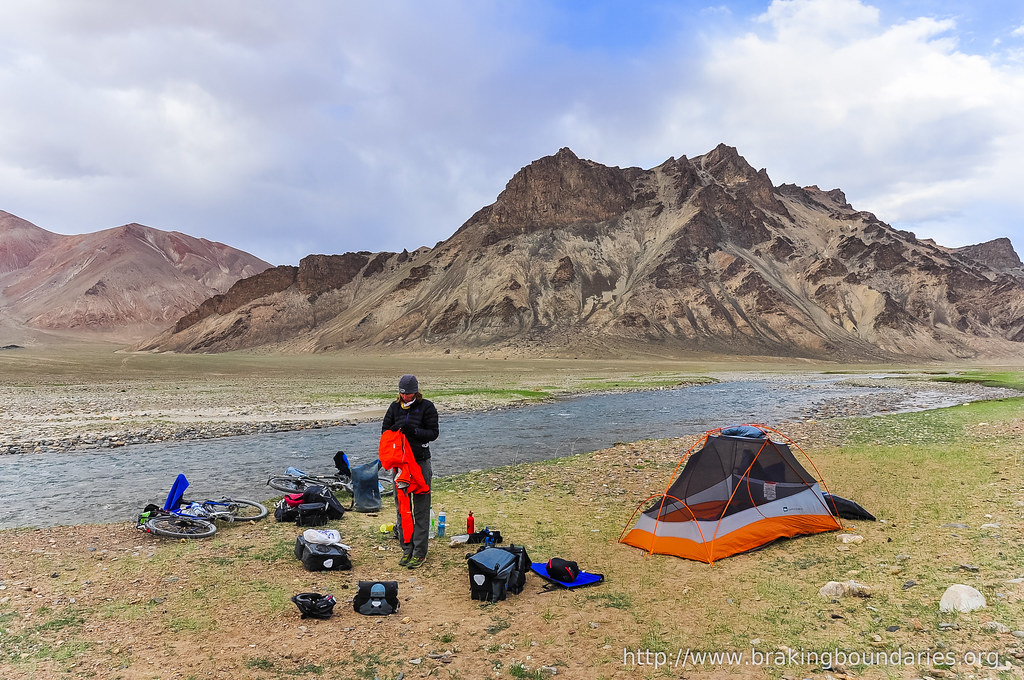 We settled on a spot by the river but by the time we were setting up our stuff, the little buggers were back. We were covered from head to toe with our buffs up over our faces and they still found skin to bite. Once the wind picked up and threw the buggers away, we started getting dinner ready as fast as we could. But there was one small problem, the cooker was broken! The pump wouldn’t pump, which makes the cooker useless. We did out best to fix it on the spot but it wasn’t working out and the mosquitos were driving both of us mad. Jared decided to try to fix it and brought the glue and cooker in the tent. I stayed out so he could use the room in the tent to work. After figuring out what would work best, he glued the pump piece back to the pump with seam grip because our super glue had exploded all over his bags. Once it was glued, it had to sit and dry for eight hours before we would know if it worked. That meant no dinner that night. We got the piece set up right and ate bread, peanuts, and dates for dinner.

Not the best night we have had but morning brought no wind, no bugs, and a working cooker. The glue worked and we had coffee and a hot breakfast before climbing to the highest peak in the Pamirs. 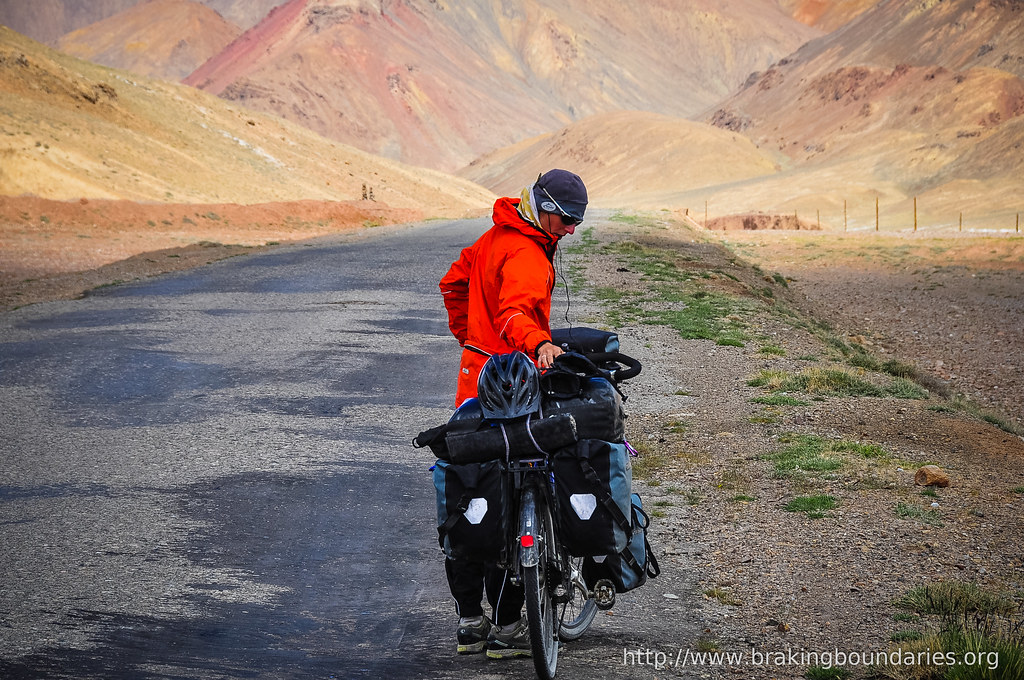 Stay Tuned for part 2 tomorrow…. Murgab to Osh, out of the Pamirs

Check out all Pamir photos for Khorog to Murghab

When Things Go Bad in the Pamirs
The Pamir Highway, Murghab to Sary-Tash