At first it seemed like a waste because my Kazakhstan visa was $160, but by going fast across Kazakhstan meant getting Bishkek faster to rest, so we were okay with the plan.

The border crossing was easy as pie and we were across the Chinese border, cycled the 7km of no mans land between China and Kazakhstan, through Kazak immigration, and on our way by 10:30am. To get across Kazakhstan in less than five days we needed to average 120km (75 miles) per day and our first day was definitely helping us reach that goal. We had good weather, a decent road, a slight downhill, and a minor tailwind. Everything was coming up Jared and Katie. 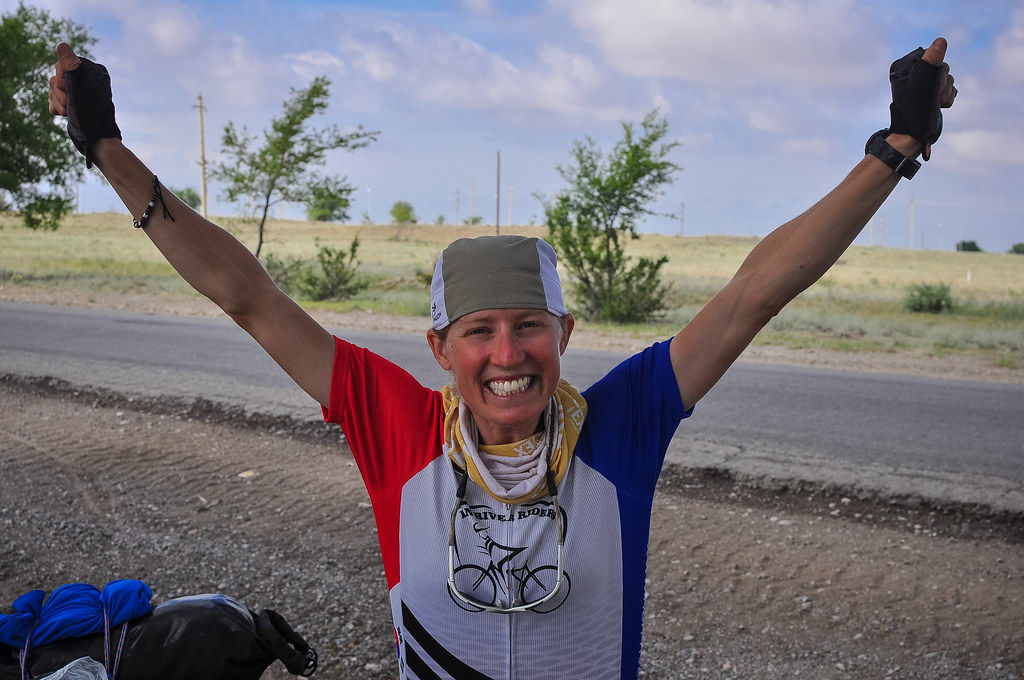 Made it across the border

We had a good day but as it was getting on we needed to find water, which is much easier to do in Kazakhstan than it was in China. We saw a water tap next to what appeared to be a house with a cafe attached. We stopped and started filling up our water bags and bottles when an older man came out. We said hello and asked him if the water was safe to drink. He then proceeded to go over to the tap, take a handful of water and drink it up. We knew then that this man was no ordinary Joe. 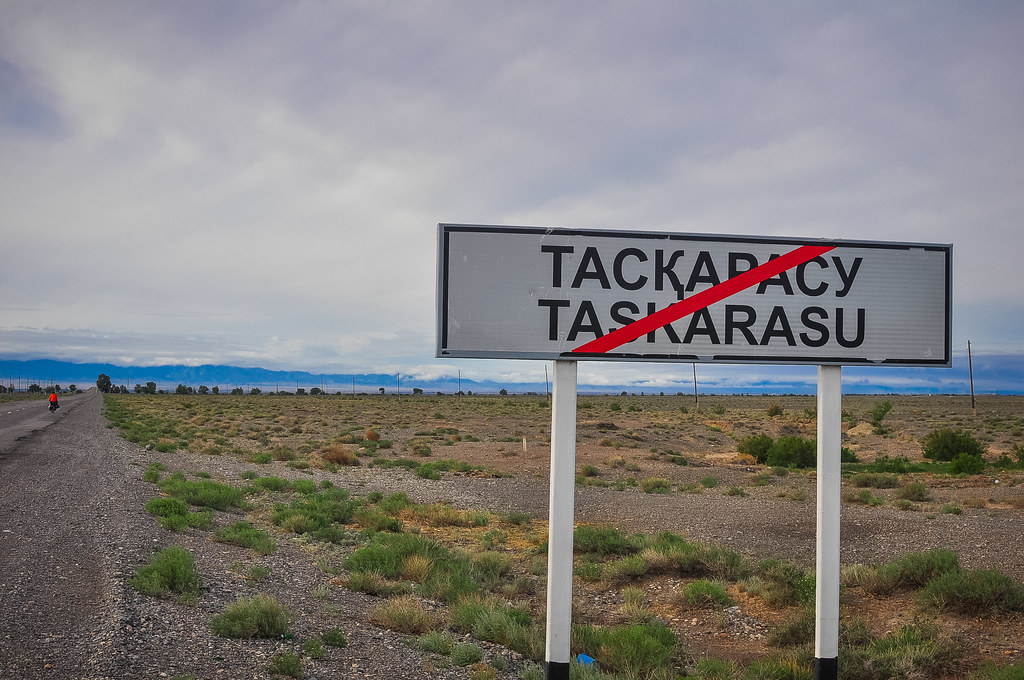 As we filled up our waters, he continued to talk to us and we did our best to explain where we were from and where we were going. We told him our names, and he told us his was Kashin, and explained through our translation cards that we were on a cycle trip for our honeymoon. He then invited us into his cafe for chi (tea) and a snack which we graciously accepted. As we were snacking we were able to have a broken conversation by using body language, our Russian phrase book, drawing pictures, and pictures on our iPods. Kashin also knew a bit of English so it made communicating a little easier.

We sat and enjoyed tea and had conversation for about half an hour then Kashin, and his wife Raihan, offered to let us spend the night. It was close to 5:30 by this point, we had done 115km already and probably would have started looking for a place to camp shortly after leaving Kashin’s place, so we accepted their offer. And boy were we glad we did. Not only was Kashin a very interesting and charismatic person, more on that later, there was a huge storm that night with major wind gusts and lots of rain. It would have been a horrible night for camping.

As soon as we accepted their offer, we got cleaned up, sorted out or things, and headed back to the cafe for more tea and conversation. We learned that Kashin had a family, had moved to the town we were in as a kid but had lived in Kazakhstan (or what is now Kazakhstan) his whole life. We wish our Russian would have been better so we could of asked him questions about the former USSR but we still learned quite a bit about him. He told us he housed two German girls in 2009 that were traveling on horse back across much of Asia. He showed us pictures and made us promise to send him pictures once we were done with our trip. And boy did we get some good ones. 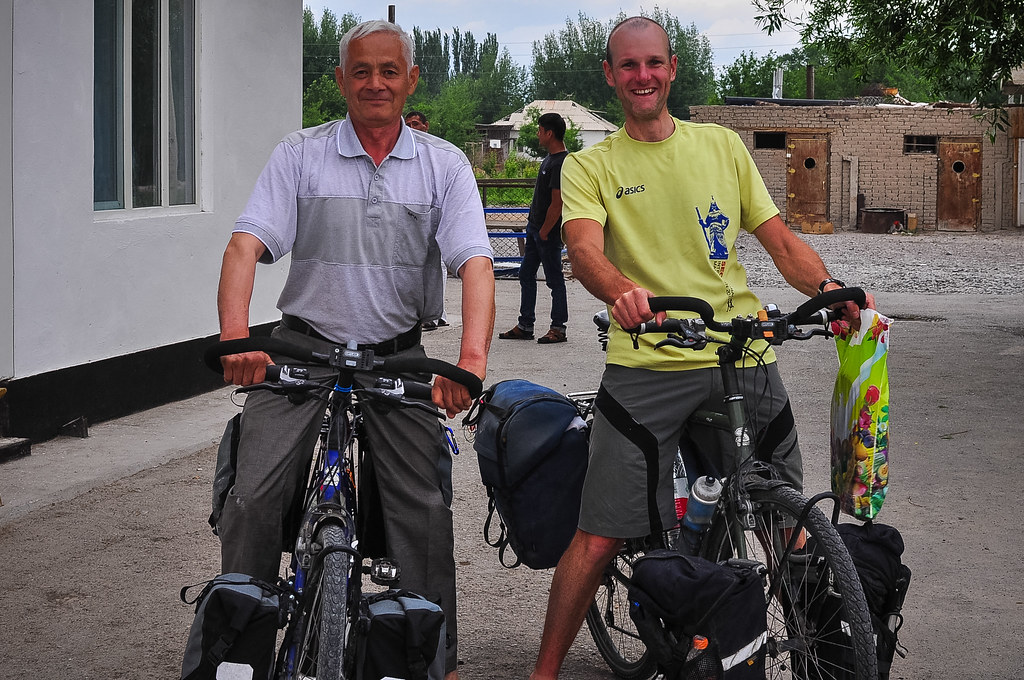 After our first snack, Kashin wanted a go at riding our bikes. He tried Jared’s first but it was too big so he hopped on mine and I was pretty impressed at how well he handled the weight. After he got the hang of it, him and Jared took off for the magazine (Russin word for convenience store) to get more bread. Once they returned he was a pro at riding a fully loaded touring bike. 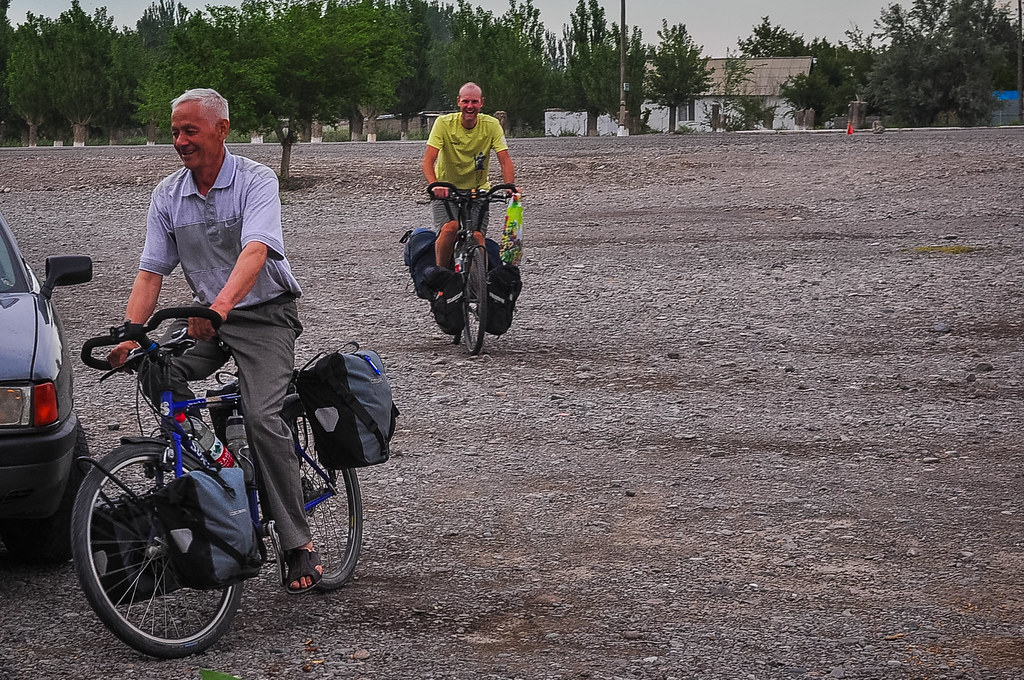 After a few more rousing conversations, Kashin wanted to show us around his farm and we got to get down and dirty. I planted some lettuce by hand and Jared got to make some bricks out of dirt and sawdust. It was a lot of fun and Kashin was proud to show off what he does. 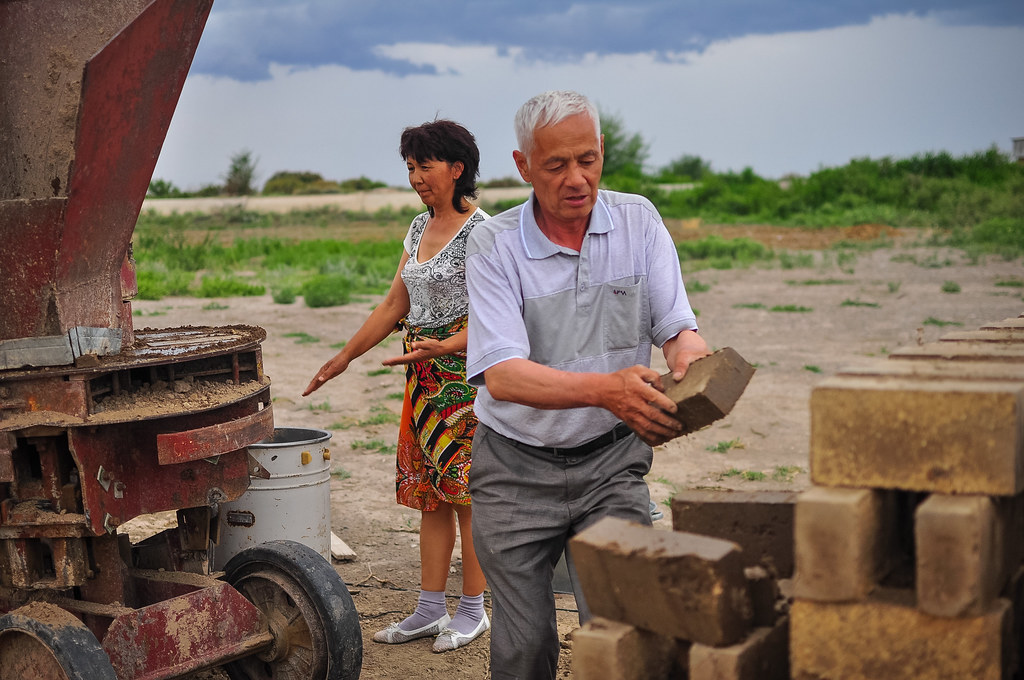 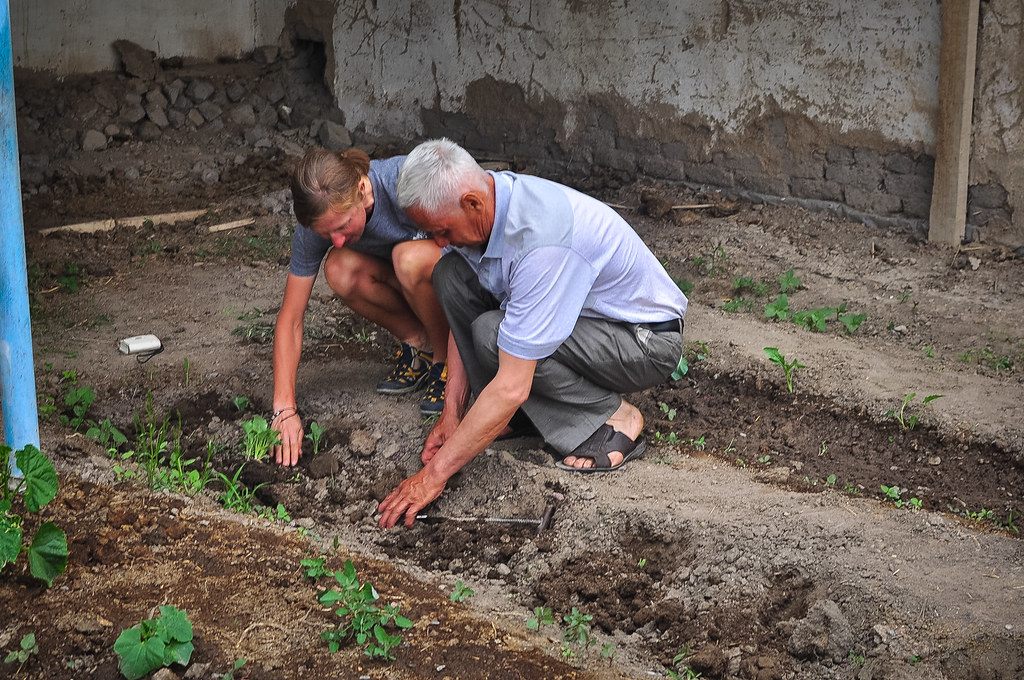 After the manual labor, Kashin showed us one more neat tool he worked with, a log splitting machine. He popped in a small log and demonstrated how it worked, I will admit it was pretty neat. 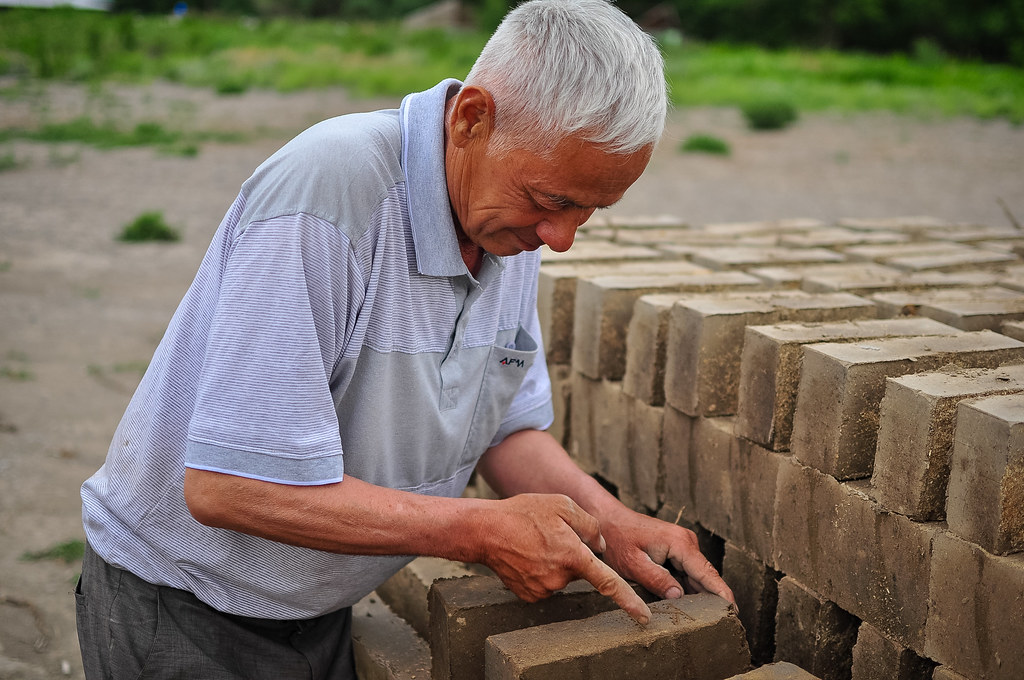 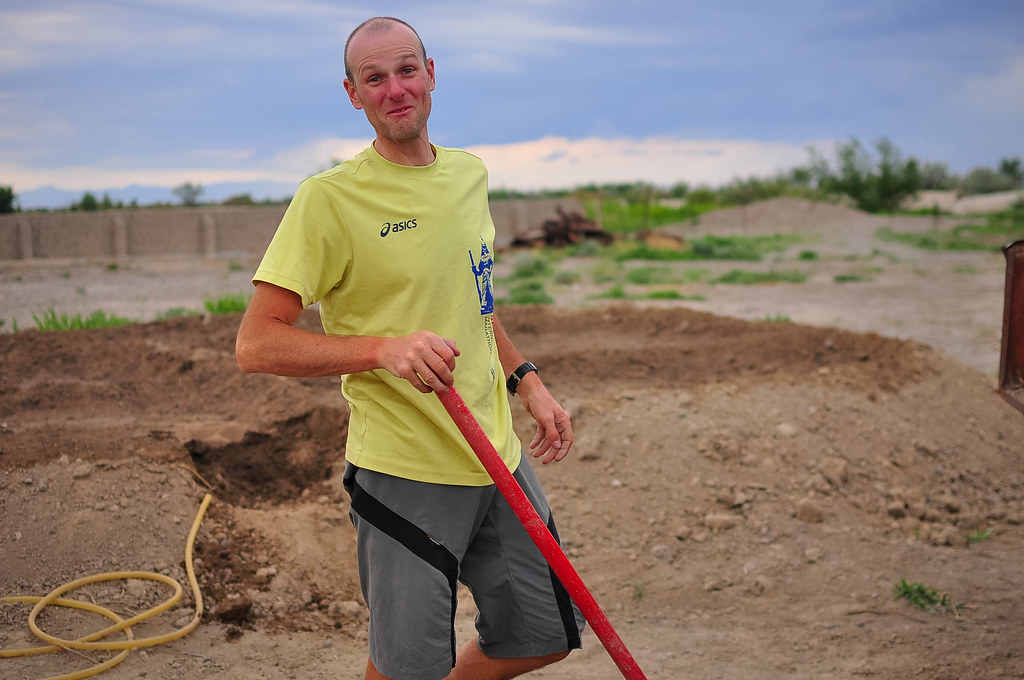 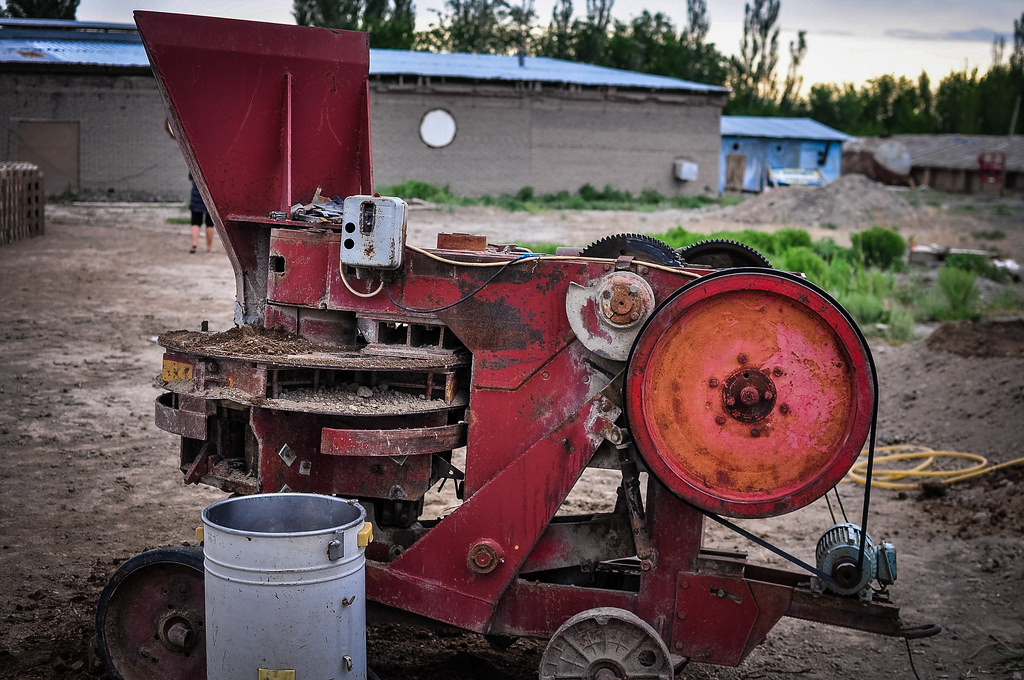 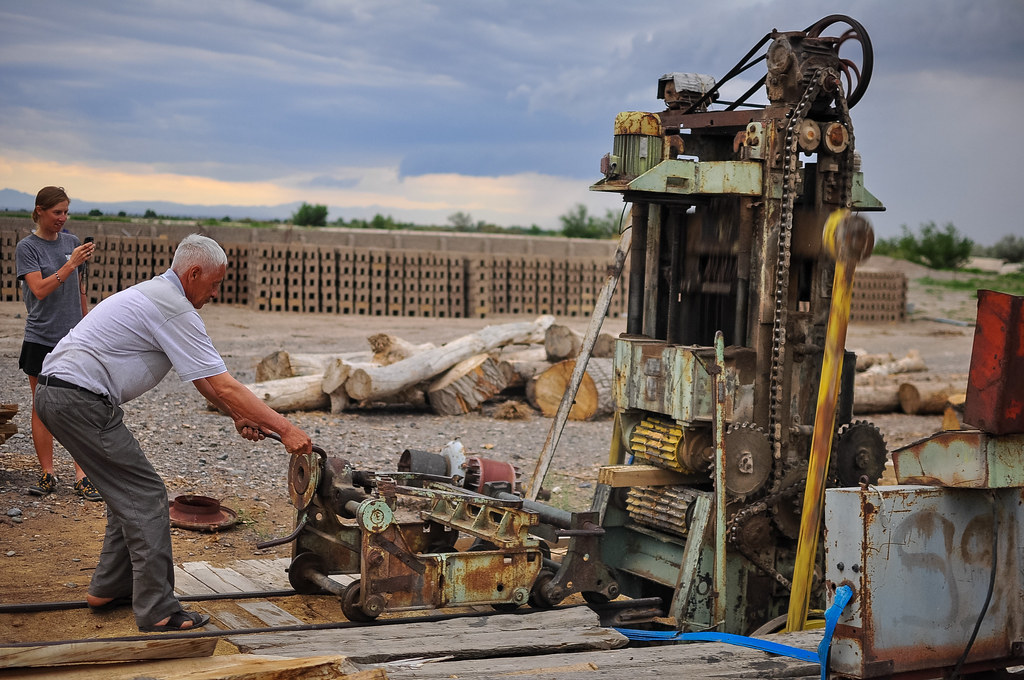 Not long after that, the wind picked up and the rain started and we were more than grateful to be inside and out of the elements. After another round of delicious food and even more enjoyable conversation, we called it a night. It was a wonderful first day in Kazakhstan and a great way to start our sprint across the country.