“Where is my iPhone? It’s always in this little pocket. Oh sh*@##t”

This was the end of our day (2pm) in Kangding, Sichuan after being stuck in a blizzard on top of the 4600m pass.

I knew exactly where it was. I had fallen to sleep that night in a tiny little Tibetan “kind of” guesthouse with my headphones in. It was under my pillow 75km away back over this mountain pass. 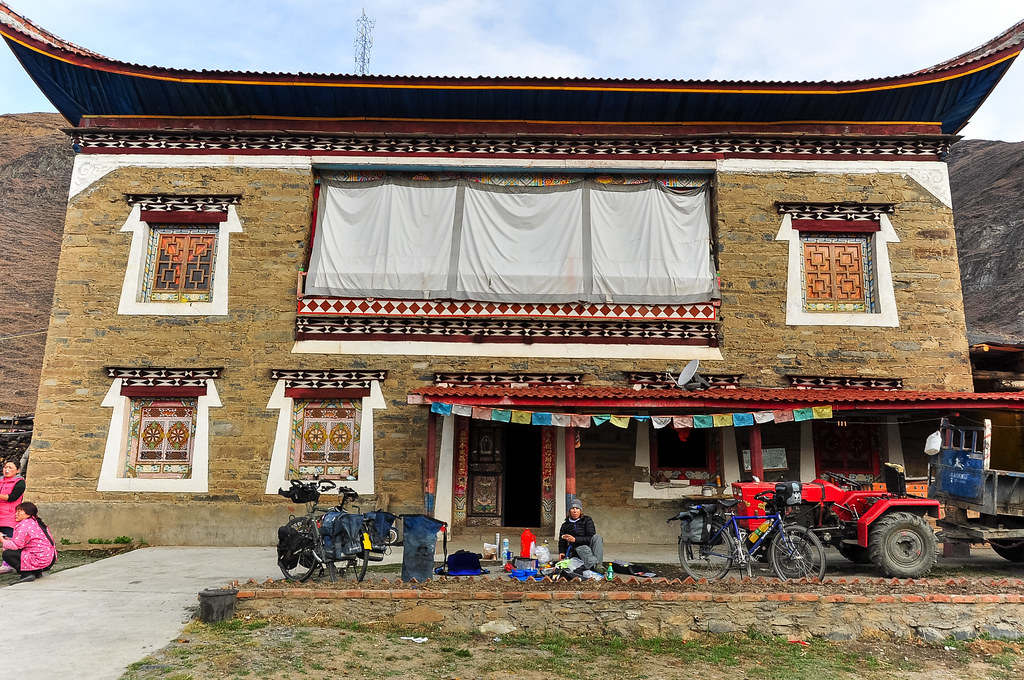 “Don’t panic. Think rationally. What can be done?”

First things first. Where the hell is the hostel? We did not have the address to the Zhilam Hostel and were having issues trying to figure out where it was. (see my map for it) which was now compounding the issue.

After about an hour we pushed our bikes up a huge hill to the hostel, (worth it btw) tracked down the staff, and told them my situation. A few minutes later the owner Kris showed up said some stuff in Chinese to one of my staff and told me to jump on the back of his motorcycle. It was now 3pm and not knowing if I would even make it back that night I grabbed some warm clothes, food, and candy and said goodbye to Katie.

It’s worth mentioning here is that there is only one daily bus back the way we came so I really had no clue if I’d make it back that day, but there were shared cars which go back and forth as they fill up. The staff said I had to go right now though as they generally stop in the evening/night.

So off I went.

4pm now and I am in a car with two other guys waiting for some other person to show up so the car would be full. Time was ticking and I was getting worried, so I yelled to the driver in Chinese, “I’ll pay for two people if we go now!”

And away we went right into a military convoy which was blocking all the traffic. False start, but my driver was a speed demon. It should be mentioned that the windy road up was truck after truck of stuff headed for Tibet crawling their way from 2800m to 4600m over the 30km I had just ridden down. This is about the time I just zoned out and pretended that passing 3 trucks in a row around a corner up hill, with just as many empty ones coming down was normal and I should not be concerned that any of us have seat belts.

Gotta give it to the driver though, he got me back. I can only imagine what he was thinking when all of a sudden I motioned to stop on the side of the road, saying “Ting ting” (stop stop) jump out of his car and run into this little Tibetan house where the family we had stayed with the night before were waiting with big smiles. They knew exactly what I want and smiled the smile I needed to see. They had my iPhone! I was jumping up and down with joy. Of course they would not take any payment as thanks.

Back in the car now driving to the town (Xinduqiaozhen, Sichuan Province, China a.k.a middle of no where) that the other people in the car were actually going wondering to myself how I would say I wanted to go back the way I came. I had it all worked out in Chinese in my head. I was going to offer my current driver the amount for the whole car and have it to myself ($25 USD).

At first this is what I thought happened. He told me to get into another car. Yay my own personal ride home. But no. This is China people.

First 4 guys got in the now little mini van.

Um, I thought I was paying more to have the whole car to myself, but ok.”

Then another 2 women and a child.

“Hold on there buddy!”

I jumped out of the car and started complaining that I was being over charged. After negotiating the price down I got back in the now loaded vehicle and started the reverse journey.


But the story does not end there. Making excellent time, and despite having needed to pee for about 3 hours now we were back on the ascent toward the top of the pass when we hit a traffic jam. Two trucks had collided on a hairpin turn blocking the entire road. Out pop all the guys for a smoke break from our now slighty emptier ride after dropping the women and children on the the side of the road somewhere.

Ah, at last a little relief, when midstream HONK HONK. Our driver decided to go off-road in his little minivan thing around the truck. Jumping back into the moving van trying not to pee myself we were away leaving a line of trucks piling up in the traffic jam for who knows how long.

Fortunately the rest of the ride was uneventful and I know Katie was grateful to see me roll in not more than 4 hours after I had left.

So what did I learn? Leaving my iPhone in remote places leads to exciting adventures, but I think I’ll try and remember it from now on.